YouTube is the most popular video-sharing platform there is, but that doesn't keep it from constantly experimenting with new features and UI changes. Recently, it experimented with new ways to get viewers to watch Shorts and cross-device downloads. Now, it's testing a new autoplay UI on the web. YouTube enabled dark mode on the web right alongside its big Material Design makeover way back in 2017. But the only way to get it working until now was to toggle the dark theme on or off manually. With more and more web browsers adding native support for these color schemes, YouTube is now tapping into the underlying API to give you the ability to match its website with your browser’s theme.

If you have an Android tablet or an iPad, you've likely installed the native YouTube app on them to enjoy your videos. But for those of you who haven't, and for anyone who's browsing YouTube on a touch-enabled Chromebook or PC, you'll be glad to know the website is now better suited for touch interaction. YouTube's community features began showing up around a couple of years ago but it took a year for the feature to reach more channels and start popping up in users' home feeds on mobile. However, on the web, these posts were not as easily accessible: you had to go to each channel's page to see if it had any community updates. That won't be the case for long though, as posts are starting to show up on the home page for a few users. YouTube has been testing different ways to help you keep watching videos on the web, while simultaneously letting you browse for more content or see details and comments. Just yesterday, the new Miniplayer PIP view was made official after months of tests, but there was also another miniplayer bar that would collapse the video at the top of the screen and let you scroll down to comments. Now, we're seeing yet another tests that's a little reminiscent of that, but it only affects the fullscreen view. For a while now the YouTube app on both Android and iOS has allowed users to minimize a playing video into a floating window, letting them browse other content without interrupting playback. A similar floating mode is apparently being tested on the web now.

Google apparently has a Material Design UI overhaul in the works for YouTube and it looks pretty good. While it has not yet been pushed to the masses, it is apparently being tested on a small group of users while the developers look for bugs and Google braces for any negative feedback (people hate change, remember). Here's a look at the goods and a way to enable the new UI for yourself.

First, let's look at the homepage. Here's the current version: 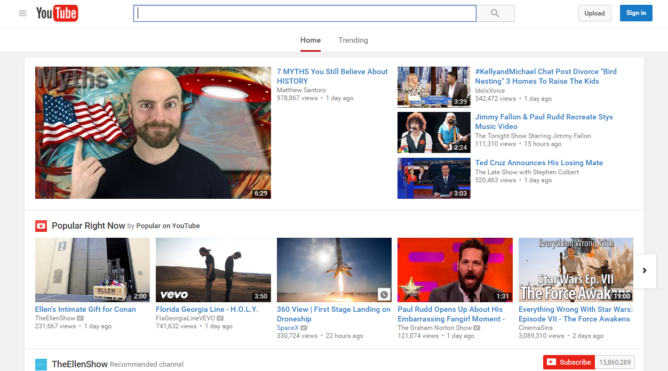 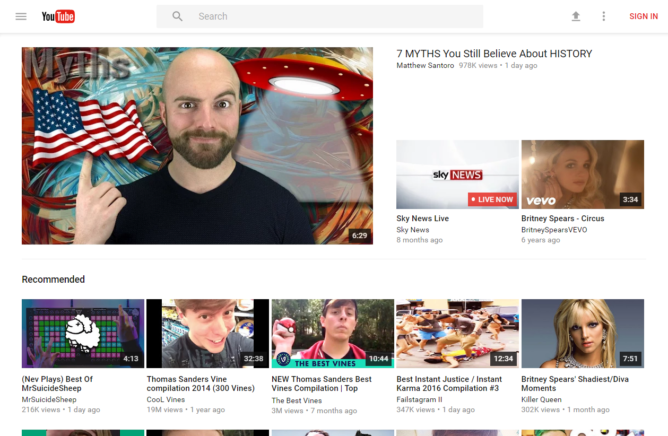 Not exactly a radical difference, but you do see the modern search bar that should be familiar from Google's Android apps and several web services as well.