The New York Times has recently released an application for Android, and it looks great!

Appearing on the Android Market following releases on both the iPhone and WebOS platforms, the NYT application looks extremely similar to its iPhone counterpart. You can access news from an abundance of sections via a drop down menu, similar to how you’d pull down the notification bar. 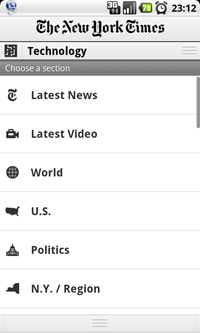 The interface is extremely simple, and easy to navigate.