Good news, Xperia Play, neo, and arc owners: the worlds greatest custom ROM, CyanogenMod, is coming soon to a device near you! Thanks to some newly submitted code, support for these devices can be expected to hit the CyanogenMod repositories soon, and nightlies will be available shortly after that.

Alternatively, for a better deal head over to Newegg.com

Once again, we find that the selection of Android phones available to those in Canada is increasing both in size and quality. The next two additions to that ever-growing range of devices available in the Great White North are to be the Sony Ericsson Xperia PLAY and arc. According to a press release from Best Buy Canada, as of April 28th, these two great new handsets will be available on Rogers.

Thanks to the hardworking devs over at the XDA-Developers forum, the Xperia arc(sic) has been rooted. The pair responsible for the breakthrough, Bin4ry and zdzihu, released the how-to info early this morning (or late last night for you insomniacs). It seems like a pretty simple process: Unlock the bootloader, download Bin4ry's file, and flash it with fastboot. 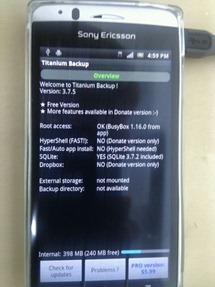 This currently only applies to the UK version of the device, but it is expected to be ready for phones running the global firmware sometime tonight.

What better way for Sony to promote its newest line of Xperia Arc smartphones than by hiring the little (big) green robot to dance? This Android has some pretty slick dance moves, giving a whole new meaning to the phrase "doing the robot".

Sit back, turn up the volume, and check out this awesome video:

A couple of weeks ago at CES 2011, Sony Ericsson announced its latest Android handset - the sleek and sexy Gingerbread-running Xperia Arc. They've also invited the press, Android Police included, to attend a media breakfast where we ended up spending over an hour of quality time with the new device, documented in great detail here. If you have questions about the Arc, I highly recommend you dive into the above post, as it contains a plethora of useful bits and pieces, all wrapped in a convenient package.

Sony Ericsson posted profits of 35 million euros ($47.14 million) in Q4 of 2010, due largely to major downsizing combined with a shift towards Android-based smartphones. Although Sony Ericsson sold fewer phones overall, Android enthusiasts will be happy to hear that they managed to sell over 9 million Android-based Xperia phones, including the X10, X10 Mini, X10 Pro, and X8, since their launch.

In the last year, Sony has made significant changes after reporting losses of 836 million euros in 2009 ($1.13 billion).