We've known since June that Microsoft was working on integrating Alexa and Google Assistant with Xbox in lieu of its own voice assistant, Cortana. With Alexa support already up and running on Xbox One, it's now time for Google Assistant to get in on the action. The Xbox Smartglass app has been available on Android for a while, letting users control the Xbox's media functions, such as play, pause, and menu navigation, directly through the app. Today, at Microsoft's E3 press conference, the app is getting a big update, being renamed to just 'Xbox' and with features comparable to the equivalent on Windows 10. With the app, you can use Xbox Live, buy games, or watch game content shared by other users, making it the ultimate companion to the Microsoft-made box sitting near your TV.

The banner features of the update are mostly to do with Xbox Live, Microsoft's online gaming network.

Microsoft's SmartGlass app is a smartphone-based manager for the Xbox One, and it gets some surprisingly frequent love from the developers for a product intended for a direct Google competitor. The latest beta version is a significant bump, 2.4 to 3.16, though the changes aren't immediately obvious beyond a few cosmetic adjustments. The new user interface moves quite a few elements around, and if it isn't completely "material" then at least Microsoft is trying to make it look like an Android app instead of a tiny Xbox window.

This update has also expanded the ability to stream live TV in 19 countries. Unfortunately the changelog doesn't list them, and the full list hasn't yet appeared on the Xbox TV Tuner's support page.

Microsoft's Xbox One SmartGlass Beta lets owners of the console try out a few new features before they reach the release version of the app. In the latest Beta update, SmartGlass gained two new options that must be exciting for Australian TV fans, and just one for Dutch users. 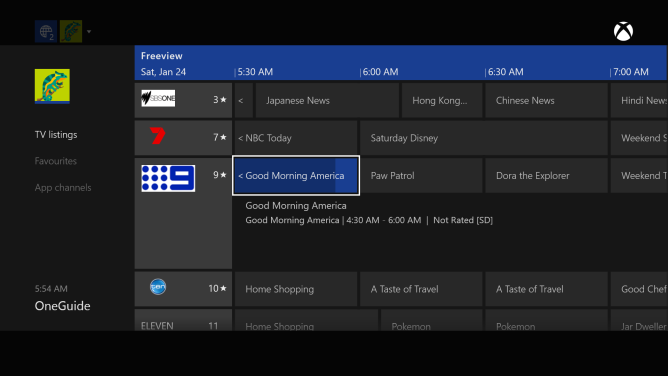 If you live in Australia, Xbox' OneGuide should now be functional for you. This TV guide shows the schedule for various Australian terrestrial channels, letting users browse the programming for a few days and maybe plan some of their entertainment accordingly. The more interesting news, however, is that Australia is getting the Xbox One Digital HD Tuner, now available for pre-order on the Microsoft Store for AU$39.95 with a release date slated for March.