Thanksgiving is over, but you know what that means - Black Friday is now officially in full effect, and we're seeing some pretty good deals, some of which are getting snatched up in mere seconds (cough, $199.99 Toshiba Thrive).

One of such BF deals is the Sony Ericsson Xperia Arc X12 with AT&T 3G frequencies for $319.99. The MSRP is listed at $549.99, and the price before today was somewhere around $370, so if you're looking for a slim and sexy Android Gingerbread device without signing a contract, this phone may very well be for you.

Just about a week after Sony Ericsson's latest plaything was first leaked, Mobile-Review's Martin Elm has gotten his greedy hands on the device, and frankly, his initial impressions make the phone seem seriously underwhelming.

Rather than making a truly competitive high-end device, SE appears to have taken the original X10, which never sold  well to begin with, and tweaked it here and there without making any major changes. 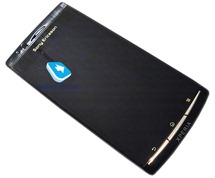 On the hardware front, Sony Ericsson's bumped the camera's megapixel count from eight to twelve, although Mobile-Review found that the prototype they handled was limited to taking stills at 3MP, with the maximum resolution for video being 325x288.

Poor old Sony Ericsson fans; as soon as their X10s get updated to Android 2.1, a new phone leaks out to let them know that end-of-life for their tragically neglected handsets is not far off. However, with this shiny new leaked photograph of the "Anzu", X10 owners can at least take some solace in the fact that even Sony Ericsson's test devices are running outdated versions of Android, despite being rumoured to run Gingerbread on release.