WhatsApp's voice calling doesn't seem like it has changed a lot since it was first tested as an invite-only feature then released to everyone in March of 2015. But the service, from my personal experience, has become more reliable, less spotty, with fewer delays and disconnections. Around me, everyone uses WhatsApp calls, because everyone is on WhatsApp to begin with, but also because local calls still aren't unlimited or cheap on any plan, not to mention the exorbitant prices of international calls. WhatsApp calls have almost completely replaced regular calls for us, and it's not hard to imagine that it must be the same in other countries where WhatsApp is popular too.

Version 2.12.87 fixes some of the last remnants of Holo in WhatsApp, materializing the calling interface, changing the default wallpaper to a nicer one, cleaning up the search bar UI, and removing those pesky Gingerbread icons that were forgotten under the More menu in a chat's overflow options. Here's the news that the thousands of you who have been hovering over every update on our previous WhatsApp Calls post have been waiting for. The service's calling functionality now seems to be open, no questions asked, no invites needed, no hacks required. The only "catch" is that you seem to need version 2.12.19, which you can find hosted on APK Mirror or on WhatsApp's website.

Once you download the apk file and install it (make sure you have Unknown Sources enabled in your phone's Security Settings to be able to do so), you'll open WhatsApp and the app's UI will have switched over to the new one with the Calls functionality enabled.

You know the WhatsApp calling feature that has been rumored for almost a year and supposed to roll out by the end of 2014? Well, it seems to be here, a few months late, and with a major caveat for now.

Reddit user pradnesh07 has come across the feature by receiving a WhatsApp call from a friend. That's how the option is presumably activated for each user, in an invite-like system where you have to get called by someone who already has it enabled. Here is the app's updated UI and how the calling interface is supposed to look. 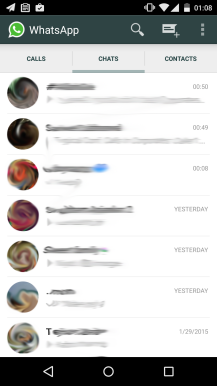 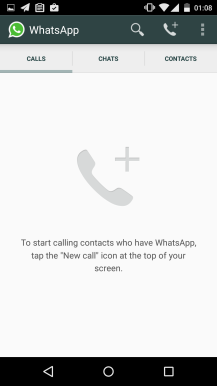 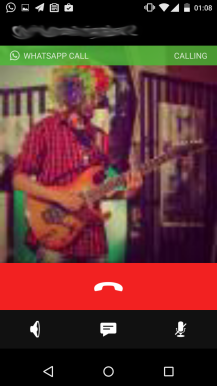 Pradnesh07 went on to call a few users too, trying to trigger a cascade of invites from his device.