Google's game-streaming service Stadia is coming to new LG TVs in late 2021. When it lands, it will support 4K and 5.1 surround sound (assuming you've got a Stadia Pro subscription) and will be available for webOS 6.0 first, with webOS 5.0 support planned later. Additional information from The Verge claims that GeForce Now is also coming to LG TVs at a later date. OS update season is always my favorite time of the year. Like clockwork, the next version of Android is released with a bunch of new fixes, features, and fanfare for the future of the world's most popular mobile platform. Unfortunately, new software usually means some old apps are bound to break. For LG webOS TV owners who are suffering from a borked LG TV Plus app following the Android 10 upgrade, we've got some good news for you. If the LG Watch Urbane just isn't fancy enough for you, the manufacturer is going to up the stakes. LG just announced the Watch Urbane LTE on its home turf of South Korea, ostensibly to have something to compete with Samsung's Gear S. The Watch Urbane LTE includes the capability to make voice calls, essentially turning it into a wrist-mounted cell phone. It would be the first Android Wear device with stand-alone voice capability... if it were running Android at all. According to LG's (translated) press release, the Urbane LTE is using a proprietary operating system, just like the Tizen-based Gear S.

The screenshots taken before the site was canned don't say much, but they say just enough. LG is an enormous company, much bigger than many in the west realize.

There are more than a few music players available for Android, but you could search the Play Store for days without finding one quite so full-featured as Music Player (Remix). The developer seems to have thrown every possible bell and whistle into the local playback app, and topped it off with a swipe-based interface and some impressive extras. It's available in the Play Store for $4.99, with a 14-day trial app available as well. 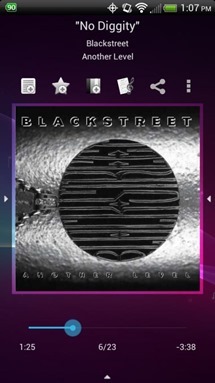 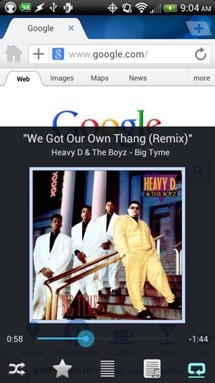 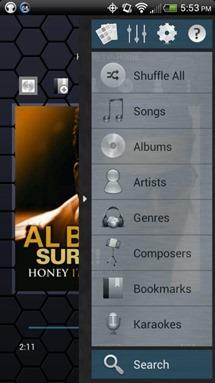 As you can see, Carbon is an app with a rich (and unique) user interface, with lots of animated flourishes on top of some recognizable Android 4.0 Ice Cream Sandwich design elements.

Remember back when an HP Touchpad was spotted running Android out of the box? Well, it would appear that after some cajoling, the CM team (in association with an attorney) have convinced HP to release the Touchpad's Android kernel source, along with a couple of other GPL components specifically modified for Android-powered Touchpads accidentally released to the wild. In addition to the kernel, HP released code to androidvncserver and i2c-tools. The only thing missing, according to Green (part of the CM team), is the Wi-Fi driver. Green explains this in an announcement on the RootzWiki forums:

I did some digging around and it appears that the wifi driver shipped with both webOS and with the Android are GPL, there are multiple evidences of that including the driver licensing string.

With its $99 fire sale price, the TouchPad finally hit the sweet spot. Units have been selling like crazy over the past week, but it seems as though one new owner got a little more than he bargained for. No, unfortunately HP didn't accidentally send him 100 units for the price of one, but he did allegedly receive a unit running Android 2.2, rather than webOS.

Making its way onto eBay, the TouchPad has already racked up 8 bids and is sitting at $685 with over 2 days still remaining on the auction, so people are obviously interested in the device.