Now is your chance to take control (mostly) of a massive Imperial Knight and bring glory to your house. Warhammer 40k: Freeblade is an action-packed on-rails shooter based in the Warhammer universe. Your noble house has been destroyed, and now you have to use your customizable battle mech to exact revenge. All it takes is a few taps. Here's a little exercise for you: think of your favorite board game. Now add hulking space marines, chainsaw swords, and elaborate baroque spaceships. Try to imagine any possible way that this is not awesome. Monopoly would go faster if you could fill all that mortgage nonsense with epic infantry battles, and someone might actually play backgammon if you could call in an orbital strike. Until that wonderful day arrives, we have Talisman: The Horus Heresy, a re-working of Talisman within the popular sci-fi setting of Warhammer 40,000. Fans of Warhammer 40,000 have put up with a lot over the years. The IP has been the basis for a great many mobile games, only some of which have been good. The newly announced Warhammer 40,000: Freeblade looks like it has some potential, just judging from the flashy gameplay trailer. Many questions remain unanswered, though. There have been Warhammer 40K games on Android before. They have not been particularly good, mostly because they simply slap the license on top of an existing mobile game style and hope the dedicated fans will spend some money. Not so with Warhammer 40,000: Space Wolf. Not only does this game come from HeroCraft, a developer that can generally be relied upon to create decent games, it's a top-down, turn-based strategy title. What an idea!

Space Wolf is closer to a tactical strategy game than a straight-up board game adaptation, but that makes sense in the context of the medium.

I know what you're thinking. "Isn't that the lame tower defense game that's vaguely related to Warhammer?" No, this is the other new-ish Warhammer game—the good one. Warhammer 40k: Carnage is a side-scrolling shooter filled with chainswords, jump packs, and all the other gear an Ultramarine needs to get by. It's usually a $7 game, but now it's down 70% to just $1.99.

Attention marine, there's a war to be fought, and those orcs aren't going to just kill themselves. Oh... but, did you bring any money? Because we're going to need that. What? Chainsword fuel is expensive. But in seriousness, we were in need of a more traditional Warhammer game after the tower defense-style Storm of Vengeance came out, and Carnage might be it.

Are you ready to fight for the Imperium? Well, now you can with the new Warhammer 40k: Storm of Vengeance on Android. This game has all the pieces of Warhammer – space marines, big explosions, and so on. Though, the gameplay isn't what fans were expecting. This is a "lane-based strategy" game.

The response to the first Warhammer 40k game on Android wasn't stellar, but that's mainly because it didn't look much like the epic gameplay we'd expect from the franchise. Well, perhaps the newly announced Warhammer 40,000: Carnage will get closer to the mark. 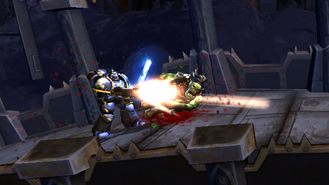 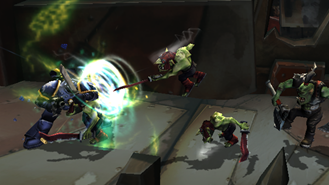