Gamers, players, and couch potatoes of the Android Entertainment Force. You are about to embark upon a great download, toward which the developers have striven these many months. The eyes of the Play Store are upon you. The hopes and prayers of war shooter-loving players everywhere march with you. In company with our brave Allies and brothers in arms on the IAP fronts, you will bring about the destruction of the microtransaction war machine, the elimination of nickel-and-diming tyranny over the oppressed peoples of the Android ecosystem, and security for ourselves in a free-to-play world.

Like its predecessor, GBWG is a 3D turn-based strategy game with a "unique comical style." Indeed, the series' art style is unique and fun, adding a lighthearted vibe to a game that encourages players to "spread mayhem and destruction." The game also has an easy-to-grasp control scheme, relying primarily on tap and swipe actions.

Looking to give players "the ultimate 3rd person shooter" experience, Glu Mobile has released Frontline Commando to the Android Market.

Frontline Commando charges players with avenging fellow soldiers who fell during a renegade attack on a ruthless dictator. Frontline includes a wide array of weaponry and stunning "console quality visuals," making it a compelling and dynamic war action game. The thrill of warding off enemy forces is enhanced by sophisticated physics, destructible objects, and a variety of challenging missions.

The Modern Combat series is one of the "most acclaimed FPS games on Android," bringing polished, action-packed, first person gameplay to the palm of your hand. The series aims to immerse the player in a "modern war experience," taking you to detailed, polished environments, and providing you with plenty of challenges, along with enough weapons to get the job done effectively. 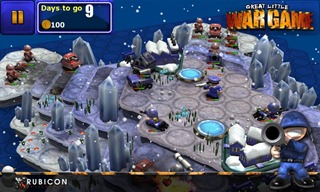 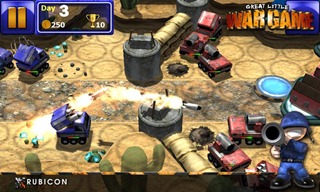 GLWG has a ton of different environments, multiplayer capability, and openFeint achievements, making it a dynamic game with certain replay value.

Adding to the elements you may expect in a turn-based strategy game, Great Little War Game is styled in an almost cartoonish, comical way while still offering big guns and explosions.

If you haven’t done much gaming on your Android phone, here are a few titles to get you started (yeah, I'm not much for introductions apparently)…

Replica Island is a great, retro game that will keep you entertained for hours. Not only is it available for every device running Android 1.5 and above, but it’s also free.

Guiding your Android through all 40 levels, you must find a mysterious object called The Source in the middle of an island which is protected by all sorts of strange creatures that you must defeat before the Rokudou Corporation beats you to it!