Earlier today, we published a first look at what we believed to be a Yahoo!-made competitor to voice assistants like Google Now and Siri. The video, sent to us by an anonymous tipster along with screenshots showed what looked to be a very impressive app with an implementation similar to Facebook's Chat Heads, whereby a Y! icon would constantly float on the home screen waiting to be activated.

This evening, TechCrunch learned through a source "familiar with Yahoo's internal projects" that the app wasn't real, implying the video was nothing more than a really nice concept demo.

Update 2: According to TechCrunch, and Co-Founder/CEO of natural language processing startup Robin Labs, the app is a real, functional product built on the startup's "white-label" voice assistant platform. While it was not commissioned by Yahoo!, it was created during ongoing discussions with the company. Read the full story here.

Update: According to TechCrunch, who has a source "familiar with Yahoo's internal projects," the video doesn't depict a real Yahoo!

Just by tapping the microphone icon in the search bar, English speakers can ask Google any number of questions and have their phone respond in their native language. Thus far, others haven't been so lucky. But now Google is expanding that functionality to more languages. Starting today, French, German, and Japanese speakers shall also be able to ask their Android devices questions and hear answers spoken in the same tongue.

The changes should take place server-side, so you don't have to wait for a update (as long as you already have the latest version, that is).

Utter! isn't the quiet kid in the back of class who only answers a question when asked, pointing out the answer in a textbook like Google Now, nor is it the class clown who dishes out snarky answers whenever he or she doesn't like the way a teacher asks a question, like Siri. Utter! is the student that sits in the front seat and always raises their hand first, the one that has the answer for every question, no matter how it's phrased or what it's about.

Google+ user Дима Прокопенко has just given us a tantalizing, more complete look at the Moto X, posting a Rogers "Tech Experts" demo video that shows off some of the hotly-anticipated device's unique features.

Before we get to features, it's worth noting that the video indicates a Rogers launch "in August," as an exclusive for the Canadian carrier. 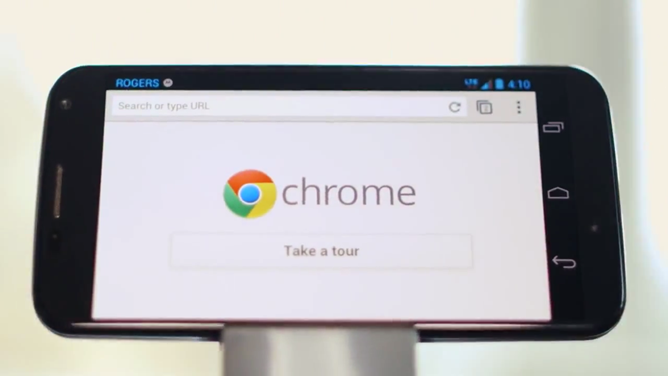 The video also shows off the Moto X's always-on voice commands, allowing users to query Google Search with their voice regardless of whether they're in the search app.

Today, however, Koush Dutta has announced Google Voice SMS integration in CM10.1 with not only the stock messaging app, but also any third party application you may use (GoSMS, Handcent, etc.).

According to a recent Google+ post by Nikhyl Singhal, manager of real-time communication products (like Hangouts) for Google, that could start to change very soon. Firstly, Singhal addressed the removal of outgoing calls for Google voice, stating that "they're working hard to support both [inbound and outbound] calls," and they should both be available soon.

Calling this an "I/O Preview," sounds a little too certain. I'm not predicting everything here will come out at I/O, this is just a list of everything we know Google is working on - their "To-Do" list.

Google Voice is a great service for replacing your carrier's voicemail and texting options. If you need something that's a bit more robust, however, SendHub has launched on Android and allows business-class users to set up a phone number (or set of numbers) and get texting and calling for free or cheap, depending on what class of service you need. 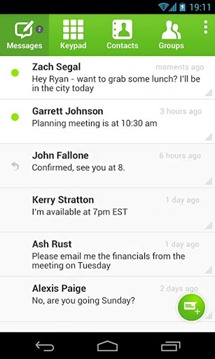 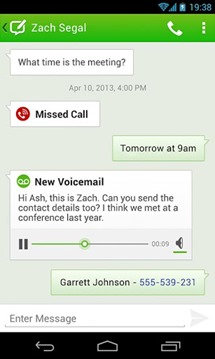 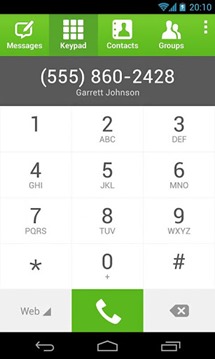 Free users can get 60 voice minutes, 500 messages, and 3 groups of 50 contacts for their first line.