If you practically live out of your car like I do, there are probably cables loosely hanging from just about every outlet, and at least a couple awkwardly laying across the passenger seat. Even if you're not sporting a ride with a Bluetooth-enabled stereo, you can get rid of at least one cable by adding your own car kit to the mix. You could already get the GOgroove SMARTmini AUX Bluetooth Audio Receiver Car Kit for just $24.99 from Amazon, but now you can also knock another $5 off with a coupon code at checkout.

IR ports are becoming a thing again with flagship devices from Samsung and HTC now commonly sporting them. They aren't used for terribly slow data transfers like back in the old days, but for controlling TVs and stuff. The built-in apps on the phones are okay, but Smart IR Remote is in a league of its own, and now it's added voice commands through Google Now. Take a gander at this video and be impressed.

In the future, people will not only be surrounded by gadgets, they will be able to control everything by speaking. In this distant time roughly six or seven years from now, the basic voice commands we've grown accustomed to thus far will look like adorable relics of a bygone era. It looks like it may already be possible to get a taste of this promising way of life by configuring the latest version of AutoVoice.

A fair number of you have probably used the ridiculously simple (and bizarre) workaround to get Okay Google Everywhere working on your device without waiting for Google, but there's a catch. If you turn on the lock screen functionality, it makes your phone a little less secure.

Over the past week, Google's exposed a handful of new and useful voice-activated features on the Now app for Android. Whether it be figuring out information about your booked car rentals, setting reminders, or finally handling timer queries properly, Google really seems to want you to talk to your phone more. Our question today, though, is just how much do you talk to your phone or tablet?

Now, this a kind of hard question to answer scientifically, I know.

Have you ever been in a situation that warranted the need for instant access to your phone's camera? Then you fumbled around, unlocking things and swiping all over, only to miss the moment. Shame, really. If only there were a way to grab your phone and say "take a picture!" and make it happen. 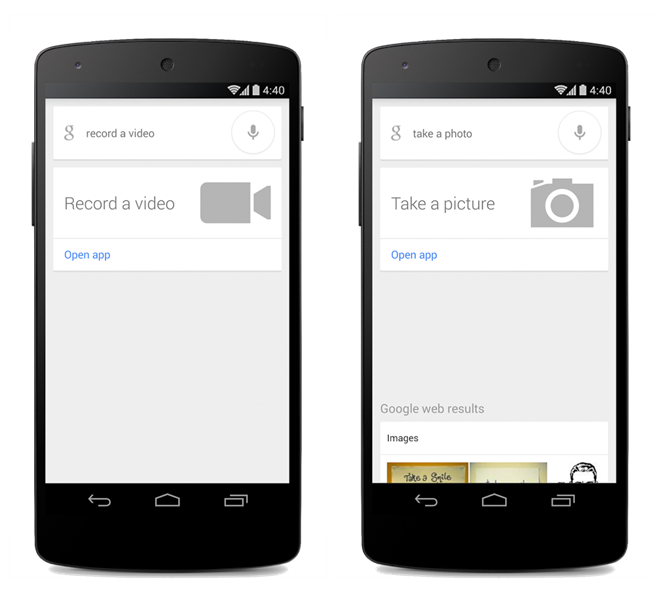 Google apparently knows your pain, so you know what it did? Added "take a picture" to the voice actions in Search.

Ever since Google Now became a thing, Search has been the go-to voice command hub for all of Android. There has been one nagging issue, however: when using a Bluetooth headset, a long-press of the action button would bring up the tired old Voice Dialer, which is essentially useless for anything other than making a call. What if I just have to know how tall Joakim Noah is while out cycling.

A big update is rolling out for Motorola's Touchless Control app that should alleviate some of the frustrations users have had with its functionality. Primarily, voice commands no longer require you to unlock your phone first in order to work. Yet for safety reasons, emails, texts, contacts, and other private information remain protected behind a lock screen. Speaking of which, users can now unlock their Moto X by saying their PIN out loud (behavior, while cool, I would be very hesitant to recommend).

Utter! isn't the quiet kid in the back of class who only answers a question when asked, pointing out the answer in a textbook like Google Now, nor is it the class clown who dishes out snarky answers whenever he or she doesn't like the way a teacher asks a question, like Siri. Utter! is the student that sits in the front seat and always raises their hand first, the one that has the answer for every question, no matter how it's phrased or what it's about.