Play Protect, the fancy reincarnation of Verify Apps that promises to make app scanning and malware detection more visible to users, has been promised since Google I/O but it took a while for it to start showing up. First, we noticed that the Verify Apps security setting was changed to Play Protect, but that is a buried menu that few people would often run into. Now, the more user-facing aspect is starting to show up in the Play Store.

If you head over to the My apps & games section in the Play Store, you might see the new Play Protect banner on top of all your available and recent updates. Back at Google I/O in May, Google announced Play Protect, the consumer-facing evolution of Verify Apps, which is the background app check service that makes sure you don't have any suspicious or malicious software installed on your device. Verify Apps has existed for many years and has grown from an opt-in feature to an opt-out one, then to a background process, and then earlier in February it started displaying the apps it had scanned.

Play Protect aims to bring Verify Apps to the foreground in the Play Store and make sure that all users are aware that their device's security is being monitored. Google rolled out the Verify Apps framework many years ago to scan apps as they were installed. Then, in 2014 it added the ability to constantly scan apps to watch for malicious behavior. You were sort of taking Google at its word as a user that Verify Apps was indeed rummaging around to keep tabs on things. Now you can see some of what it's doing—the settings menu now shows which apps have recently been scanned. Google has released its second Android Security Annual report, and it's full of big, impressive numbers. The full report is 49 pages long and covers the state of Android security in detail, but the basics are covered in Google's latest blog post. The gist is, Google scans all the things to keep Android users safe. We're talking about billions of apps; the Verify Apps service sure is working overtime.

Google's previously announced enhancement to the Verify Apps framework is rolling out to users now, according to the official Android blog. Your device already has the standard Verify Apps system built-in that scans at the time of installation, but the new version will be watching all the time for suspicious activity. 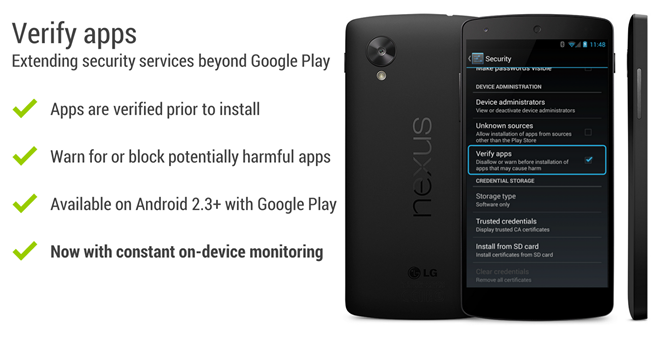 Verify Apps compares each app you install with known malware signatures, but there's always a possibility you are downloading a form of malware that hasn't been identified yet. An app might also install malicious code by some means after it has passed through the filter successfully. That's why Google is ramping up its scanning system.

Android malware isn't as big of a concern as some mainstream media reports would have you believe, but it is enough of an issue that Google started beefing up its security a few years ago. There's the "Bouncer" server-side scanning that checks apps before they go live, and your device runs app verification as new packages are installed. Now Google is about to patch a hole in the local app scanning by making it run continuously. 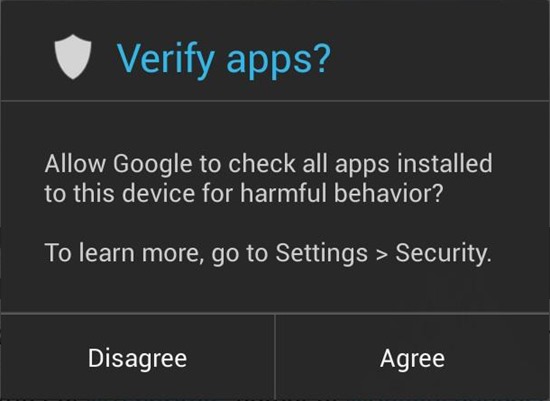