Due to the amount of information crammed into day 1 of the Google I/O conference, I am blitzing through everything that happened, keeping it short and to the point.

Since a lot of you have been wondering, I wanted to post a brief confirmation that the official version of the HTC Hero 2.1 update Sprint released today is exactly the same as the one we covered on May 14th, 5 days ago.

HTC's servers are so slammed right now that I am getting about 3KB/s downloading - you might as well download the leaked file instead - they're exactly the same.

Today, HTC announced on Twitter that an Android 2.1 upgrade is available for the HTC Hero for Sprint users.

The upgrade can be downloaded from the following URL, and is a 118MB Windows .exe executable:

HTC’s notes include the following details:

The software upgrade posted below provides several key enhancements for your HTC Hero:

In order to take advantage of the latest improvements Sprint has made to the phone's ability to receive and utilize signal efficiently, updating to the latest ROM is not enough.

There is a special component outside of the ROM itself called the Radio Baseband, which ROM developers don't include (for whatever reason) into the custom ROM images, and instead sometimes provide as a separate update. Wow, did this day finally come? After months and months of waiting, and after seeing Samsung Moment get its update today, we have gotten word from AndroidCentral that there is a leak of the official Android 2.1 update for the Sprint HTC Hero available to download.

Judging from initial reports, this is the real deal.

allanon80 from AndroidCentral even posted this:

Ok guys just got off the phone with Sprint. THis is the official release they have just not put it up on Sprint yet.

Yesterday we reported on the Samsung Moment 2.1 update arriving early due to a Sprint's goof - the update page showed no sign of the update but the file you would download was that one and only long awaited Android 2.1.

We later saw reports that the update was pulled, though could not find any evidence of that, as the .exe file seemed to remain at 100MB+, which was the same as the 2.1 file.

As you may have seen, I've been running Android 2.1 on my Sprint HTC Hero for a few weeks now, and I'd like to follow up the mega [p]review of all the new features with a few subtle observations that made me, a long-time Hero user, happy.

These may be small things but it takes only a few of them to take the overall phone experience to a new level.

By the way, if you want to experience Android 2.1 on your Hero without waiting for Sprint/HTC to release it, you can proceed to this how-to that I compiled just for you: To All Complaining About Android 2.1 On HTC Hero – Step 1: Chill Out.

It's finally here - today should be the day when Verizon starts rolling out the Android 2.1 OTA (over-the-air) update that we reported on a few days ago.

The update page on Verizon's site, which provides benefits of the new 2.1 OS as well as the update instructions, still mentions "Coming Soon!" as the release date.

That last part, however, apparently means today, May 11th, according to a MobileCrunch tipster who sent in this internal memo screen: 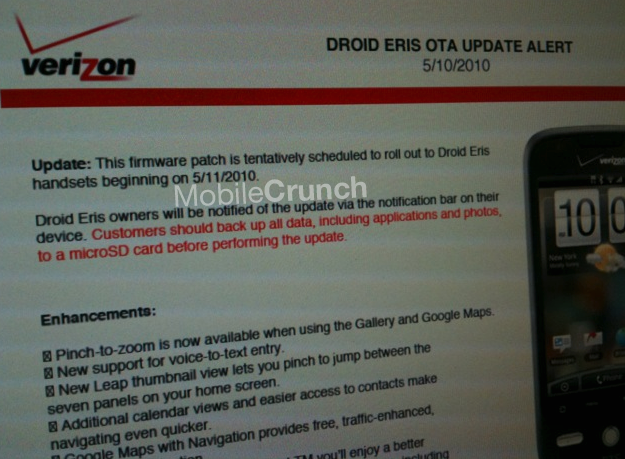 We know it says "tentatively scheduled" and Verizon doesn't exactly have the best track record with releasing 2.1 when it says it is, but we have a hunch that it will actually begin on time this time around.

Many of you are complaining about Android 2.1, even though Sprint is well within the promised June timeline.

I understand - it's frustrating to see phone by phone get upgraded with your Hero sitting on the sidelines, ever since its release last October.

I know how you feel but the truth is, we don't know whose fault it is.

Maybe it's Sprint's evil plan for everyone to buy more EVO 4Gs.