Google seems to be doing a lot of tinkering on the basic interfaces of Android TV, if only because the company's experience with television UIs is less extensive than it is on smartphones and tablets. Yesterday an update to the "leanback" launcher (Android TV's default home screen) added the ability for users to manually rearrange app icons. Today the Android TV version of the Play Store gets a slight adjustment as well: the "update all" button is back, baby.

If you'll recall, the last major update (from just over a month ago) gave the entire store interface a new look.

It's a big day for Netflix: the Android app for both smartphones and tablets has been updated to version 2.0. So with this earth-shattering update to everyone's favorite streaming service, they've added... a WiFi switch. That's it. It makes sure you won't use your mobile data while streaming movies or TV shows. There doesn't seem to be much else to justify a full version bump from 1.8.1.

Alright, to be fair, there are a few user interface tweaks. You can now get to genres a little quicker via a pop-up menu. And according to the Google Play listing, playback stability has been improved, though a quick look at "The Man Trap" doesn't show any real difference.

Have you ever seen a mind-blowing app that's sure to change the way you use Android... only to be discouraged by a $6.99 asking price? Or maybe one of your regular apps has updated and broken some core functionality, and you have to uninstall it and just wait for the next version. Now there's a service that will keep tabs on your somewhat neglected apps and convert it into an RSS feed for your favorite reader. AppFeed.net is free, easy and an absolute lifesaver if you're not in the habit of constantly checking the Google Play Store. 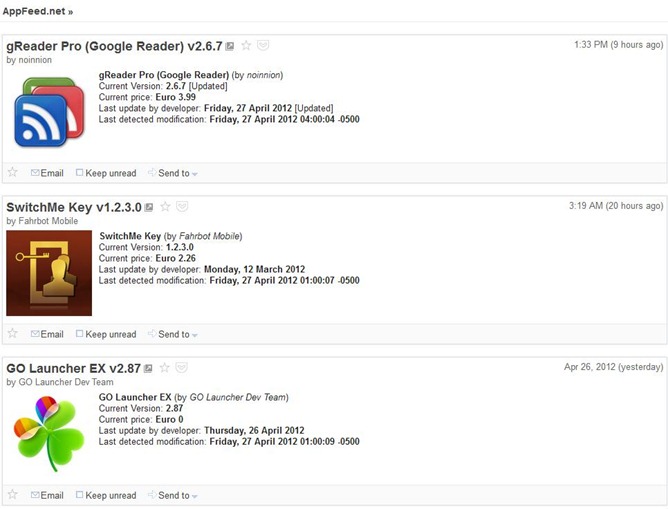 It turns out that some Nexus One owners running CyanogenMod 6 (CM6) have been experiencing issues when trying to update a handful of system apps. As such, XDA-Devs forum member unforgiven512 has thrown the updates into a tidy package. The updated apps are:

Not only does this fix the app updating bug, but it moves the app info from the "data" partition to the "system" partition. There are two benefits to doing so:

2. Updates to system apps are stored on the "data" partition.

Don't pay for data you don't use! Get the Goldilocks of mobile data plans, designed to fit just right