Universal Pictures has decades worth of classic horror movies in its vaults, but many of them aren't available on the most popular streaming services. If you're in the mood for some scares (and this past week hasn't been scary enough for you), Universal is planning to show seven of its more popular horror films on YouTube, starting later this month.

In an effort to make your vacation to Universal Orlando Resort more pleasant and at least a little less chaotic, NBC Universal has released an official app to the Play Store that promises to "put everything you need to know about your vacation in the palm of your hand."

Essentially, the app gives users timely, contextual information about their visit, showing wait times for attractions and rides inside the parks, in-park notifications, and a map that will navigate you through the park to your chosen ride or destination.

The app also allows users to create lists of their favorite attractions, and promises "hidden surprises throughout the parks."

Google, in a bid toward continued competition with the other social networks, today announced Google+ Sign-In, a unified login that can be utilized across the web, as well as Android and iOS apps to make sign-in and sharing much simpler. Think Facebook connect but, in Google's words, "minus the social spam."

Google, in a post to the Google+ Developers Blog, emphasized four key points of focus for Sign-In's first release, the first of which being the idea that "simplicity and security come first." Basically, the sign-in process will work like that of Facebook – choose your G+ account, review the permissions the website or app wants access to, approve, and you're set.

I have a love-hate relationship with docks. On the one hand, they offer me a place to keep my devices, a home, designating where my fancy smart toy resides in an otherwise chaotic world. I may change which pocket, hand, spot on the coffee table or place in my heart that a phone belongs, but a dock is always a constant. When night comes, the dock is its resting place. On the other hand, paying $50 or more for a dock that I can only use with one phone is not something I'm a fan of. The iLuv iMM377, aside from being in desperate need of a catchier name, aims to fill the void in my life.

Yesterday's update UVLH1 for the Galaxy S II on T-Mobile may have shaken things up a bit when it comes to NFC and ISIS, but it now looks like Samsung has also sneaked in a tweak dumbing down universal search. A similar "fix" was discovered in T-Mobile's version of the Galaxy S III 2 weeks ago, and it seems like Samsung is not taking any chances with its older sibling either.

As evident from the screenshots below, searching for "maps" only brings back relevant suggested web searches and results, but not the local Maps application. For comparison, I've included a shot of doing the same on the EVO 3D.

Well, this is awkward. While it was recently reported that Samsung removed the universal search feature from its international Galaxy S III devices, it turns out Samsung didn't mean to. Oops. According to the Korean manufacturer, the company only intended to remove the feature from certain US variants of the handset. Samsung told TechRadar, a UK-based tech publication, that the feature would be returning to the UK variant of the Galaxy S III. It's unclear if this means that it will only be returning to the UK variant, or if Samsung is simply informing TechRadar and the BBC of the versions relevant to their readers.

A few days ago, a new version of Universal Androot was released with support for Froyo, but a number of devices were still incompatible. 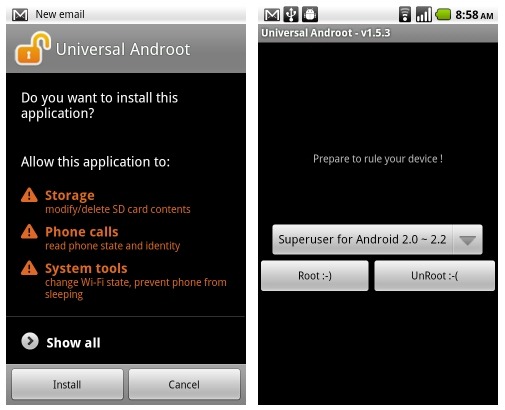 Note: This application just gives you root and does not unlock the /system partition or the boot loader on those devices that have them locked, such as the Droid X.
Read More