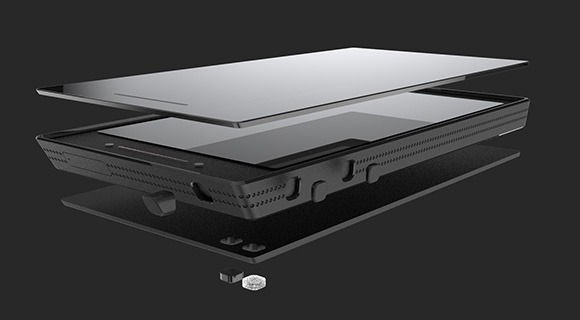 Say what you will about Canonical and founder Mark Shuttleworth's outlandish goal, but the conceptual hardware and software for the Ubuntu Edge is the stuff that smartphone dreams are made of. A unibody chamfered metal housing, a synthetic sapphire screen, 4GB of RAM and 128GB of storage are among its highlights.

Well, not you, personally. It's an Indiegogo crowdfunded campaign that's asking for $32,000,000 from a variety of users...

While Ubuntu (and Linux as a whole) may not be hugely popular among the consumer desktop computing crowd, it'd be folly to discount the OS as a whole. Especially among the Android developer crowd. Well, if you happen to be among the tech-literate faithful who use open source desktop operating systems to write code for your open source phone operating systems, Canonical would like to make your life a little weirder: introducing Ubuntu for smartphones!

Not to be confused with Ubuntu for Android, which allowed a docked Android phone to run a more-or-less full version of Ubuntu a la Webtop, this new product is a full-blown smartphone OS, distinct from Android entirely and meant to run all on its own.

Good news, Penguins! Google is working on a Drive client for your favorite OS!

Google Drive, if you haven't heard, is Google's Dropbox/Google Docs hybrid. It launched yesterday with 5GB of cloud storage and desktop apps for Windows and Mac, but our tuxedoed counterparts were left out in the cold.

The lack of Linux love caused a bit of an uproar on Google+, where #driveforlinux was a trending topic for a good part of the day. Teresa Wu, the Community Manager for Google Docs, took to a G+ thread and gave the happy news:

Earlier today, Canonical announced Ubuntu for Android, an incredible new system that will put a full desktop OS on your Android-powered phone. Now, one employee has taken the time to show us just a little bit of what Ubuntu for Android is capable of, and it's nothing short of awesome. Check it out:

As if we weren't excited enough after the initial announcement, seeing it in action really makes us want to get our hands on this and give it a whirl. Anyone at Canonical ready to hook Android Police up with some beta software?

On a side note, anyone happen to notice that all of the screenshots on the official Ubuntu for Android page display 12:04 as the time?