HTC this morning officially unveiled its new flagship for 2013: the HTC One. So far, we've posted the full specs, our hands-on, and the list of carriers in the U.S. and Canada, but if you live outside those territories, you might be wondering exactly which carriers and major retailers to visit to pick up the One when it becomes available in March.

We've got the current list, courtesy of HTC, right below. I imagine it may grow in the future, but in the meantime I applaud the company for itemizing it in such great detail - something you don't get to see too often these days.

Well, it's finally official: the Samsung Galaxy Note 10.1 will be available in the U.S. beginning tomorrow. The 10.1-inch slate packs identical specs to its international counterpart:

This giant-er Note will be available at two different price points: $499 will land you the 16GB version, while $549 gets you 16 more geebees for the 32GB version.

Two weeks after ICS first hit the Galaxy Tab 10.1 in Europe and mere days after the kernel source release, the delicious 254MB update has now reached the States. The Android version is 4.0.4, and the Samsung version is IMM76D.UELPL (also P7510UELPL depending on where you look). Go ahead and check for it manually if you don't see a notification just yet or fire up Kies. 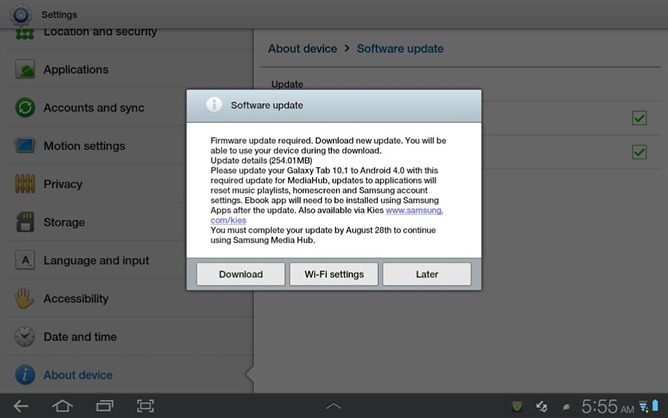 Congratulations to all the Wi-Fi Tab 10.1 owners. Welcome to the club.

Like clockwork this time, the Ice Cream Sandwich update is now being sent over-the-air to Transformer TF101 owners in the United States and Canada.

ASUS UK, which also promised the OTA today, assured us it's still coming:

To those asking, TF101 ICS update is scheduled to be with you all today. Please be patient, we have a whole world of Tablets to update ;)

Update: Looks like it's rolling out worldwide at this point.

So go ahead, check your Transformer and join the cool kids Android 4.0 club. 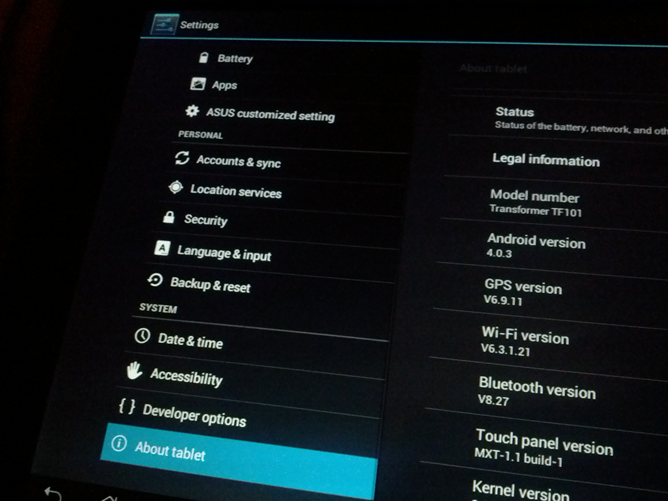 Thanks, @denrid0cks, Dude, Bert, and others!

A few days ago, Motorola pushed out a special soak test of the ICS update to a number of Wi-Fi XOOM owners in the U.S. Apparently, no serious issues were found by the company's engineers, as the very same Android 4.0.3 update (IML77) is now rolling out to everyone. Well, everyone in the U.S. with a Wi-Fi XOOM that is. This makes the XOOM the 2nd mainstream tablet device to officially receive ICS, losing out only to the Transformer Prime that beat it to the punch by only a couple of days.

Head over to Settings > About > System Updates to see if the 81.9MB update is available on your XOOM, let it do its thing, and enjoy the greatest version of Android Google has ever created.

The official Galaxy S II press conference has only just begun (it's streaming live now), but all 3 carriers we've been expecting to see the S II on - Sprint, AT&T, and T-Mobile - have already sent out their press releases.

The Galaxy SII is already available in Europe and Korea, debuting as Samsung's fastest selling smartphone to date. The 3 variants in the U.S. will share many of the same specs, but some aspects, such as the screen sizes, battery capacities, and mobile radios, will be different.

Here are some of the common specs:

One specific spec worth highlighting is Samsung's Exynos processor, which should be quite a bit faster than the Tegra 2 that most dual-core phones have been using so far (with the exception of the TI OMAP on a few models).

CoPilot, a popular navigation and mapping company, released Live USA Standard and Premium v9 offline navigation apps to the Android Market on Monday, June 27th. While most people immediately think and resort to using Google Maps, CoPilot apps could come in quite handy for those without data plans (such as phones disconnected from service or Wi-Fi only) or in areas of poor data reception (I felt the need for something like this just this past weekend on a trip to a remote lake).

During the promotional period this week (until Sunday, July 3rd), the Premium version that usually costs $29.99 is going for $9.99 and the Standard version which is usually $4.99 is on sale for $2.99.

If you've been waiting for Android 2.2 "Froyo" to officially hit your Samsung Galaxy S device, be it Fascinate, Vibrant, Epic 4G, or Captivate, prepare to be disappointed, as Samsung is still stuck doing complicated testing required for the upgrade to go live. Countless over-promises and delays have upset many Galaxy S owners over the last months, but after releasing and pulling back Froyo upgrades in Canada, Samsung wants to really do things the right way this time. Back to the waiting room we go. 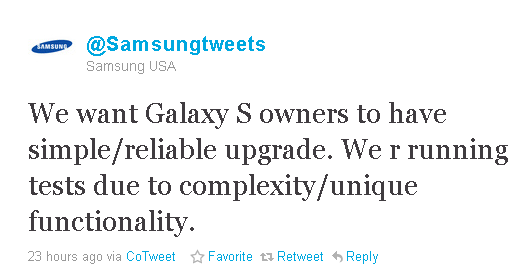