Ever wonder how Android Police always knows right away when Google makes a new country available for any of its services? It's simple! We pick whichever intern has been annoying us this week, chain sit him down in front of a computer, and make him reload Google Support pages like this one once every thirty seconds. When he sees a change, no matter how tiny, he bangs a pot with a wooden spoon, thus alerting one of our diligent writers to take a look at the page. If something of substance has changed, like a new country being added to Google's list of officially supported Android Auto countries, we write it up.

Anyone who's used the Internet for a few days knows that Google (and all the other search engines at this point) will suggest alternative search terms if the algorithm determines that you've made a typo or a mistake. At least one user is now seeing this behaviour on the Android app version of Google Search, and seeing it before you would expect to: right in the drop-down search results that appear before you actually press Enter. 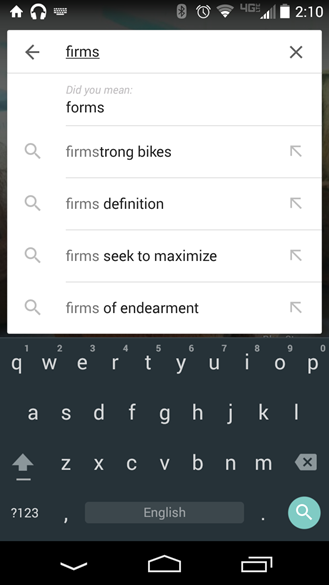 What the hell are firms of endearment?

Just in case anybody out there took this as a sign that their Galaxy Nexus 2 prayers would definitely be answered, we should point out that this almost certainly doesn't tease an unannounced device.