Remember when Sprint said that it wouldn't be offering the tried and true two-year phone contracts anymore? Yeah, not so much. Fierce Wireless reports that the carrier is once again offering two-year service contracts, and the Sprint Wireless website bears this out. New phones are being sold with a significant discount, up to 100%, in exchange for customers signing a promise not to stop paying for 24 months. Everything old is new again.

If you'll recall, two-year contracts fell out of favor after T-Mobile made a big show of discontinuing them as part of its "uncarrier" initiative in 2013. Instead T-Mo started promoting a new payment program which allowed customers to buy phones in installments with interest-free financing, very much like European carriers have been offering for years.

The country's fifth largest carrier is hoping to start off 2016 by picking up a few more customers. Starting today, US Cellular will let you get 6GB of data for $40 per month, as long as you sign a two-year contract. This offer is available online and in stores. Though, with the competition moving away from two-year contracts, think carefully about whether this will save you money long-term.

Go ahead, show up in black - but you know what, everyone else there will be doing the same. Be bold. Be bright. Suit up in something that will make people remember you. No, not yellow, that's tacky. Purple, are you serious? No, lets go with white. Go ahead, try it on. I'll wait.

Mr. LG G2, you're looking good. The people over at AT&T are going to love you. Just you watch, now that you're available, no one's going to even bother looking at G2s in black anymore. I mean, just look at you. 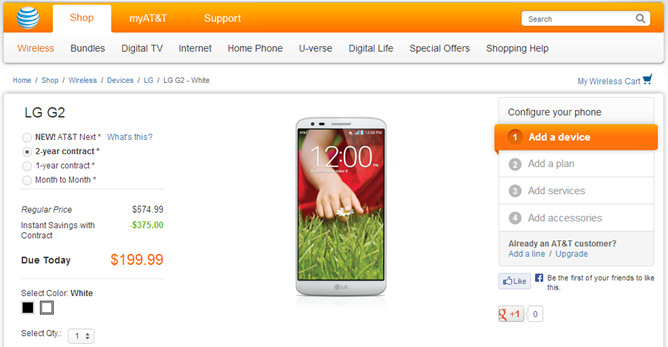 Now sure, you're not offering anything that any other G2 lacks.

Those (im)patiently awaiting the upcoming launch of the DROID 3 now have even more info on what to expect: thanks to Droid Life, we now know what the phone's pricing will look like, both on- and off-contract.

If you're cool with signing a new two-year agreement, you'll be paying the now-standard price of $199. Alternatively, if the shackles of a contract are enough to scare you away, you could purchase the phone off-contract for the fairly reasonable price of $459 (I say "fairly reasonable" since other carriers, such as Sprint, happily charge over $600 for an contract-free phone).

Droid Life says that "direct fill orders" (though we haven't a clue what that means) will begin tonight around midnight EST, and if the latest round of rumors is to be believed, you'll be able to pick up a DROID 3 starting July 14th.

Wirefly just opened pre-orders for the highly anticipated Motorola XOOM, the world's first Honeycomb tablet, and like Best Buy, they'll be selling the device for $799.99 on a mandatory one-month contract that will cost a minimum of $20 (oh, and what's up with the "Switch My Existing Wireless Number to my new MOTOROLA XOOM" option?).

In related news, Wirefly lists a February 24th shipping date, though they note that this is "subject to change." Additionally, if you pre-order an unreleased phone along with your XOOM, your whole order will be held until both items are ready to ship (as opposed to something like Amazon's model, where your orders are shipped separately).

US Cellular is really proving itself to be the carrier for holiday shoppers not wanting to spend a small fortune on gifts, isn't it? Just two days after announcing that all phones will be free until the 24th, the carrier's turned its price-cutting gaze to the Samsung Galaxy Tab and lowered the tablet's price to only $199 on contract, half of what it was before.

The only real catch is that you're required to sign up for US Cellular's $54.99/month plan. The plan does buy you 5 GB of data along with tethering capabilities, but I still can't imagine paying almost $60 a month on top of my regular phone bill, especially since messaging is excluded.