Twitter's banhammer of UberMedia's properties - Twidroyd, UberTwitter, and UberCurrent - caused a bit of an uproar and panic on Friday, but both companies quickly issued their statements on the matter. Twitter clarified that UberMedia's apps were violating policies and trademarks, while UberMedia promised to release an update fixing the problems as soon as possible.

Here is what Twidroyd clients were seeing on Friday: 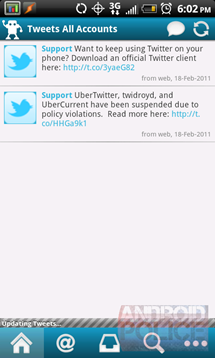 Over the weekend, the team behind Twidroyd came up with all the necessary fixes to the app to make Twitter happy again and released an update v5.0.2:

To our delight, things indeed seem to be back to normal, but we'll see if Twitter is satisfied for good when its engineers return to work on Monday (or Tuesday, since the U.S.

UberMedia "violated Twitter policies and trademarks in a variety of ways."