I can't decide if John Legere is trying to be a consumer's champion, or if he just really likes pissing off less bombastic executives. In between skywriting over Verizon's New Jersey head office and planning a tenth "Uncarrier" event, the outspoken CEO has just starred in yet another YouTube video designed to win potential customers and antagonize the competition. This one's titled "The Scarriers," and it's a Halloween-themed dig at some of the more outlandish stories about Sprint, AT&T, and Verizon.

Exaggerated names like "Big Red" (Verizon), "The Death Star" (a popular term for AT&T and its globular logo), and "The Big Yellow Bus" (okay, I haven't heard that one before) are interspersed with references to $2 million phone bills and letters to the CEO met with replies from lawyers.

The Nexus 9 is not the most beloved Nexus device ever made. Its build quality is a bit questionable (people don't call it the Flexus 9 without good reason), the price is a little on the high side, its performance leaves something to be desired, and it hasn't had the best track record with updates. With these issues it's possible that Google is sitting on a fat stack of these tablets that it hasn't been able to unload.

Until now that is. You see, Google has a trick up it's sleeve that's sure to help relieve their Nexus 9 overstock problem faster than a Snapdragon 810 overheats.

Back in December, we published a story about a patent (6665797) belonging to Ho Keung Tse. The patent supposedly covered a DRM method by which users could download paid digital content to multiple devices without going through another payment process.

During a previous suit against a handful of tech companies, most of Tse's patent was invalidated. After amending the patent's language, Tse went after Google, Samsung, HTC, and Blockbuster, but a summary judgment stopped his case in its tracks.

Tse was planning to appeal his case to the US Supreme Court, but in the meantime he went after independent developers. In a notice distributed to developers, Tse said Google's Play Store (and by extension any dev with apps on the store), was violating his patent.

Last week there was a bit of hubbub among the still-tiny population of Google Glass users, after Google sent out packages to the Explorer program. A few of them spotted UPS packages coming in through the My UPS service, and speculation ran wild. What could this 1-pound package be? A free Nexus 4? Keys to one of Google's self-driving cars? A golden ticket for admittance to the Google X Dream Factory?

Nope. It's a water bottle. 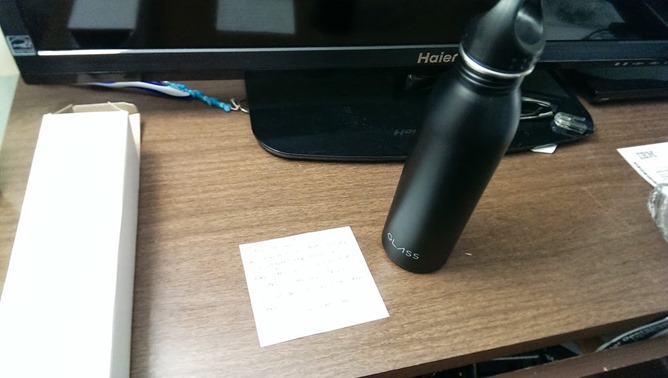 Just a water bottle. Nothing smart (or even mildly clever) about it: open the top, put some water in, and drink it. Glass user Jason Alvarez posted these photos to Imgur, showing off the sweet new hardware and a hand-written note from the Glass team.

About two years ago, we reported that one of the most recognized patent trolls around, Lodsys LLC, had sued game maker Rovio over Angry Birds for Android, claiming that the defendant had "infringed and continues to infringe" on patents controlled by Lodsys.

If you're not up to snuff on your patent troll bestiary, Lodsys is a company that produces no real goods or services, but holds plenty of patents that they are willing to either license or use for legal action.

As David correctly pointed out at the time, Lodsys suit said less for Lodsys' actual claim to the patents they sued over, and more for their overall strategy of intimidation and unsavory utilization of the patent system.

April Fool's 2013 is here (at least in some time zones), and the Internet has already given birth to a few early pranks. We will spend the next two days second-guessing every piece of written content, getting rickrolled, and generally feeling the way members of bomb squads do on their missions.And we will hate love every minute of it.