If you use Chrome, then you have probably seen it deliver a notification — or, at least, you've been to one of those sites that spams you with repeated requests to enable them, yuck. According to some changes spotted by Chrome Story at the Chromium Gerrit, that notification system could be picking up the ability to schedule notifications for the future. Late yesterday IFTTT saw a huge update. There are more than 30 new services tied to the automation tool via the new Data Access Project, including a ton of government and travel data sources. There is even a new Google Photos service that interfaces with the platform, as well as a VoIP feature for applets that use the phone service. Now you can set up IFTTT alerts on subjects like the economy and public transit, as well as upload images to Google Photos.

If you suddenly saw a new app pop up on your phone this weekend marked "Trigger," don't be alarmed - the much-loved NFC Task Launcher has just been rebranded. The rechristened app has been given a new look and a small functional update, but it retains all of the NFC goodness that's earned it a 4.5 star rating in the Play Store. 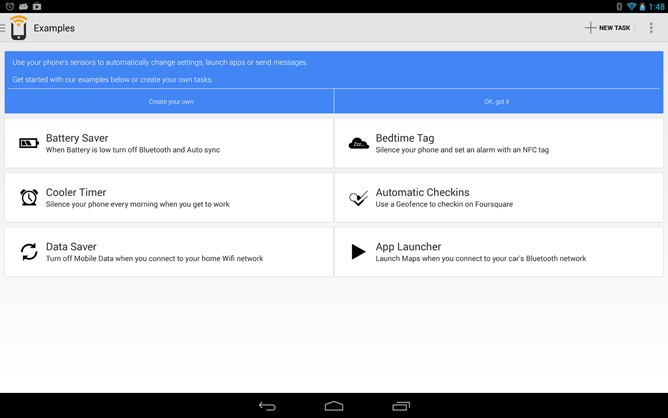 Trigger has been given a slight visual update, which makes it a little more effective when used on tablets. There's also a bit more yellow trim around the place to spruce up the Spartan interface a bit. More importantly, you can now bind multiple triggers to the same task, expanding the already impressive capability of Trigger even further.

The app, which costs $4.99, offers a surprisingly long list of fully customizable trigger modes from time lapse to distance lap (your camera will take a photo every 30m), long-exposure HDR, star trail mode, bulb ramping timelapse, and a cable release mode that supports exposures up to a full 24 hours.

This isn't the first remote trigger app we've seen for Android – Chainfire introduced DSLR Controller Beta just over a year ago, and Helicon Remote offered similar functionality back in February.

If your Android device relies on your interaction with it in order to do things, you're seriously missing out. There are several options that allow you to cut the cord, so to speak. The popular options have long been Locale and Tasker but, as you can see from their market pages, you have to be fiscally dedicated to the tasks they perform. In addition to that, these applications (Tasker especially) can be somewhat (read extremely) intimidating in the level of control they give you and the sheer volume of options at your disposal. If you're looking for something a bit simpler but still really powerful as well as significantly more free, AutomateIt might be just the tool you need.