Updates to Google Maps have been a bit quieter over the last few months as fewer features come to each update than we're accustomed to. A recent announcement revealed this time has been spent on some cool new predictive features that will help users find restaurants, events, and other places that match their taste and style. The first stage of those new features, scoring for places that match your tastes, is going live now.

Google Maps received a fairly minor update last night, bumping it up to v9.15. There aren't any big visible changes, and even the teardown was pretty light, but there is one addition to the Settings screen that's worth mentioning. Under the Notifications section is a new checkbox titled "Traffic information." Obviously, it lets you shut off traffic notifications, which might be fairly handy if you already know they're coming or there tend to be a lot of false positives reported in your area. It's not the most exciting feature, but it will certainly matter to a few users. 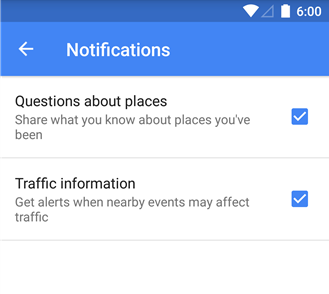 This is the only noticeable change to the interface we've seen so far, but there may be some others lurking in a corner we haven't checked yet.

Update: Google has finally provided clarification on the recent Search update. Going forward, Google Now will shoot you an alert if it detects a traffic incident along your drive, and as you can see clearly in the image below, the app is pulling this information via Waze.