Last week, Google finally made it possible to bring third-party navigation apps to Android Auto without requiring a beta version. The company promoted a list of new driving services coming alongside the change, including TomTom AmiGo. If you're looking to switch away from Google Maps or Waze, a new update to AmiGo adds Android Auto support to display on your car's infotainment system.

The never-ending drama between Huawei and the United States government has only sped up the company's desire to rid its dependence on U.S. technology. Huawei is already making its own operating system and app store, and now Huawei's phones will have a mapping tool ⁠— courtesy of TomTom. IFTTT is one of the most powerful home automation services out there, but it hasn't been doing too well lately in terms of supported services. Just recently, we learned that IFTTT integration with Nest products is being broken soon. A couple of months before that, a bunch of Gmail IFTTT applets stopped working. In keeping with that theme, a measly 13 services were added in the past 2.5 months compared to 31 being removed. We don't talk about TomTom wearables almost ever at Android Police, and that's because of one particular reason: the TomTom MySports app sucks. It's a shame because TomTom makes very interesting products spanning from the simple Touch band to the Spark 3 GPS and HR watch with storage for music, and all the way to the multi-sport Adventurer with multiple outdoor modes, compass, and barometer.

But whenever we talk about any smart gadget here, on Android Police, we mention its app, and in this case, we couldn't gloss over the fact that no matter how good TomTom's products were, their app frankly sucked, which made the whole line-up irrelevant for our coverage.

Sygic is one of the most well known mapping software providers especially in car dashboards. And thanks to detailed TomTom maps, offline maps access, extensive POI databases, and some more features available in its app, it's also a viable option on your Android phone. The free tier only gets you this far though, it's the Premium option that enables turn-by-turn navigation, speed limit warnings, lane guidance, and more. However, even if you had paid for the Premium license, you still didn't have access to the Dashcam and Head-up Display features.

Those were paid add-ons (on top of your paid Premium license), but that changes today. The Nike+ Running app has crossed mile marker 1.6, and it's joined by a few other racers. Surprisingly, all of them manage to run in sync.

GPS makers Garmin and TomTom both produce their own fitness apps as side-gigs, and now Nike+ integrates with them both. Either partner's runs will automatically appear inside of Nike+ Running. You can find the information under your activity history. 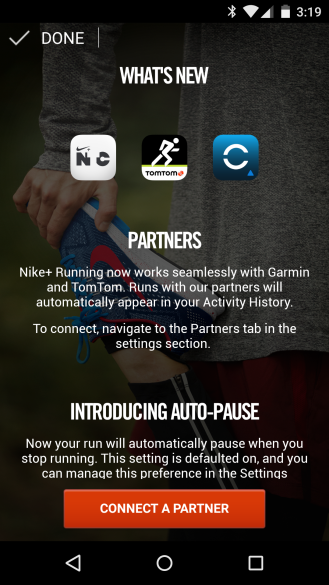 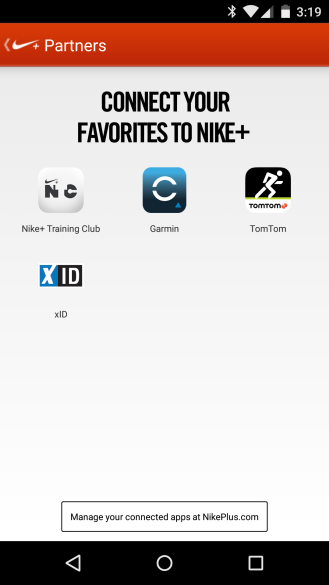 This release also includes auto-pause, which pretty much does what the name says. Your runs will automatically pause and resume when you stop moving. If you don't like it, you can toggle this option in the app's settings.

I imagine there was a meeting at TomTom some months ago where it was decided, for whatever reason, that there was a need for them to bring their own maps and navigation apps to Android. Now, after who knows how long, those apps have come to fruition. Only they're quite expensive ($38-$60), and not compatible with, well, any modern device. Not the HTC One X, Galaxy Note, Galaxy S III, or Galaxy Nexus. And no tablets. Or many other relevant devices.

Why? Because the apps are only compatible on devices with 480x800 or 480x854 resolutions. So, high-end phones from two+ years ago.