Amazon's latest app giveaway is worth more than $50 and will remain available for the next week. As you can see in the hero image, some of the headliners include The Bard's Tale and Weather Live, though there are several more that may interest you. And while the super-popular Monument Valley has disappeared from the promotional page, it's free too. This is bigger and better (and longer-lasting) than its typical free daily deal, though it isn't their best ever. Beyond those already mentioned, you might want to pay special attention to Quell Memento and Alarm Clock Pro.

Here is the full list of what's on offer, all of them free for now:

Humble Bundle: PC and Android 8 has been out for a week now, so it's time for more games to be added to liven the deal. Three new titles are now available: Bad Hotel, The Bard's Tale, and Solar 2. These should appear automatically in the libraries of anyone who has already paid over the average, and they will likewise be available to anyone who passes that bar going forward. The average currently sits at just over $4, which is not at all a lot to ask for nine games to play on your Android device. 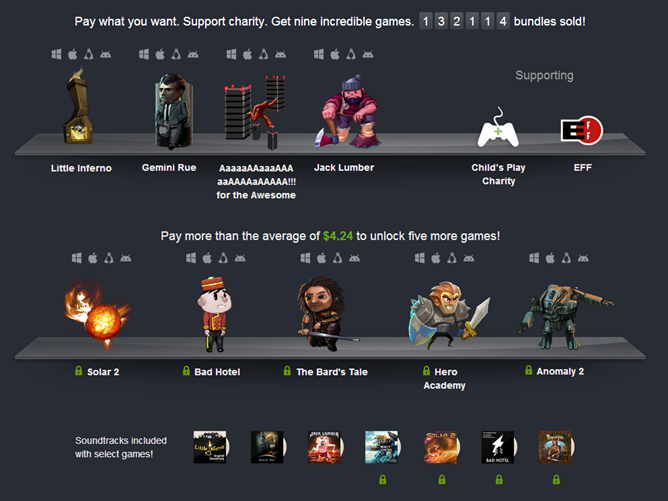 These three games join the likes of AaaaaAAaaaAAAaaAAAAaAAAAA!!!

It's that time again. Another Humble Bundle for Android has rolled out, and like always, it's jam packed with mobile gaming goodness that is bound to provide more than enough value for your digitally transferred buck. This bundle contains six great games, including one we considered a little bit creepy, but a lot of fun. Pay whatever price you want to get your hands on Anodyne, Greed Corp, Incredipede, and Ticket to Ride. Anyone who pays over the average will also get to poke around with the Bard's Tale and Worms Reloaded.

This bundle marks the Android debut of Anodyne, a 2D puzzle adventure game where players assume the role of a character exploring his uneasy subconscious.

Android gaming is becoming a bigger deal all the time with high-end games launching on the platform every week. The Bard's Tale is something a little different, though. Not only is it a highly anticipated game with similarly high production values, it is the biggest game I'm aware of on Android. With 20-30 hours of content and 3.5GB of game data, this is a real time investment. Let's figure out just how special The Bard's Tale is.

In this game, you play at the Bard, a roguish wanderer and occasional monster slayer. You arrive in the town of Houton with little more than a lute and an empty coin purse.

No, it's not the Bard of Avon, but this smarmy rogue should still be able to keep you plenty entertained. The Bard's Tale is a Diablo-ish RPG starring Cary Elwes (best known for ruining your perception of the Dread Pirate Roberts and Mel Brooks' Robin Hood by doing this). Complete with absurd humor, catchy drinking songs, and adventure galore, this game promises to keep you engaged for up to 3.5GB worth of your time (for Tegra device owners, 1.7GB otherwise). Yes, it's friggin' huge.

We'll be doing a review of this game before too long, so I won't spoil everything.

The older among you may remember back in the hallowed days of the Apple II The Bard's Tale was a neat text-based RPG that gained quite a following. Well, fast-forward 20-something years and The Bard's Tale arrived on iOS as a reimagined 3D action RPG. Now that same version of the game is destined for Android, and it's going to be a Tegra exclusive.

The original Bard's Tale was heavy on pithy humor, and its modern reincarnation follows that script. In the game, you will play the Bard, a wandering ne'er-do-well that's tired of the questing thing.  All he wants is to find some "coin and cleavage."