Well, how about that? It would appear that Tekken Mobile has come out of soft-launch today to finally release for the majority of Play Store users. It is, of course, a fighting game, but more along the lines of the mobile version of Injustice 2 than anything previously found in the Tekken franchise. So yes, this means you can expect collectible cards (in a fighting game no less), horrible controls that force you to use those collectible cards, and a plethora of in-app purchases that are of course used to buy all of those collectible cards. So yeah, you can clearly see where this is going. Tekken Mobile soft-launched in Canada back in August of 2017. Sadly, those of us who do not live in Canada have only been able to pre-register for the mobile fighting game adaptation in eager anticipation of its worldwide launch. Suffice it to say, I got tired of waiting. So here is a hands-on with Tekken Mobile, so you will know exactly what to expect when it finally launches for the rest of the world.

That's right, Bandai Namco has just announced that they'll be releasing an all new Tekken game for Android sometime soon. You can pre-register for the title today on this Tekken Mobile website. While I'm sure plenty of you 90's fighting game fans will be overjoyed with this announcement, the question remains, how will Bandai Namco monetize this mobile version of their popular franchise? Will this be a premium release, or will it be more of the same free-to-play content we have all come to expect?

Namco is known for a lot of properties, but many of them have ties back to the 80s and a time period when graphics were measured by the number of colors displayed on-screen at once. Tekken is an edgier, younger franchise in its early 20s that you'd think the company would be proud of. But with the release of Galaga: Tekken Edition, Namco has brought three Tekken-related titles into the Play Store, and none of them actually let you beat people up.

In 2013, Namco released Tekken Card Tournament, a digital version of a physical card game that, while containing 3D fighters in the background, was hardly a brawler.

The Tekken series is one of Namco's biggest properties, a beloved handful of games that helped pioneer the 3D one-on-one fighting genre. Tekken Arena is an embarrassing mobile cash-in, with no 3D element to speak of and barely any portion that could be called "fighting." It might just be the most absurd deviation from the central element of a gaming property that I've ever seen. 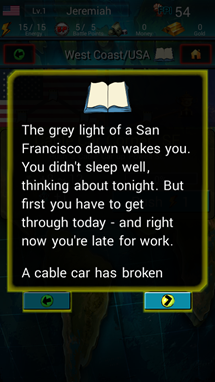 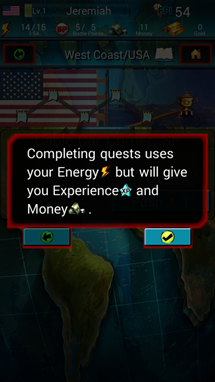 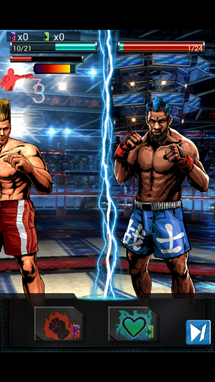 Namco calls Tekken Arena a "Massively Multiplayer Online Strategy Fighting Game." What does that mean? It means that this is essentially a text-based RPG, wherein you guide your fighter through a series of ever more improbable excuses for beating the crap out of strangers.

It's really a cruel joke to put the words "Tekken" and "Tournament" in the title of a game, and then not deliver what everyone hopes. Well, Tekken Card Tournament has just arrived on Android courtesy of NAMCO BANDAI. Get ready to square off against opponents and do battle with your carefully-assembled deck of cards. Hey, that's... almost as good as fighting. Right? 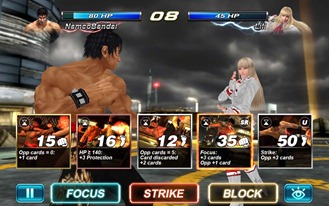 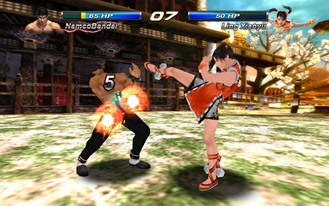 This title is meant to tie in the the launch of a physical Tekken card game this summer. You'll be able to buy over 190 cards in real life, then take advantage of augmented reality and QR codes to bring the physical cards into the game instantly.