Nintendo's wildly successful Switch console is a hybrid—part handheld and part big screen gaming. Inside, it has hardware that many Android fans will recognize as being very tablet-like. Nintendo doesn't use Android on the Switch, but an independent project is working to make that possible. There's now a very early build of Android Q up and running on the device. NVIDIA has just taken the stage at GDC for its big "Made to Game" announcement, and guess what... it's another SHIELD. This one is just called SHIELD, though, and it's an Android TV box. NVIDIA has added its own twist on Android TV, just like it does with regular Android. The new NVIDIA SHIELD has support for native 4K 60Hz video signals and NVIDIA GRID game streaming technology.

A new generation of SHIELD hardware powered by the Tegra X1 is a no-brainer - despite tepid interest outside of the Android and gaming communities, NVIDIA has shown no sign of slowing down its first-party mobile brand.

NVIDIA has been the first few pebbles of the landslide that is CES for the last few years, and 2015 is no different. To kick off the world's biggest consumer tech show, CEO Jen-Hsun Huang started with mobile. The company announced its successor to the Tegra K1 mobile processor, the Tegra X1. This chip includes an octa-core 64-bit CPU married to a 256-core GPU. And that second chip is the killer: it's based on the same architecture as the latest full-sized NVIDIA desktop graphics cards, Maxwell. 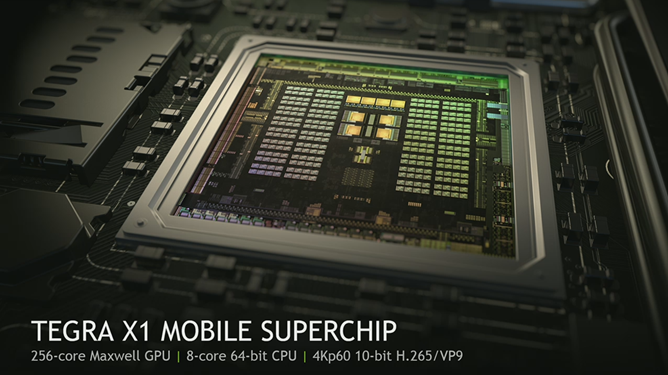 While Huang was quick to point out the chip's fantastic graphical capabilities (without going into extreme detail), he also wanted to show off its video rendering prowess.