tales from the borderlands Hey, you. Yeah you, the gamer who constantly complains that there's nothing new or interesting to check out. First of all, you're wrong, and second of all, here's why: TellTale's adventure games. These folks constantly come up with new and interesting stories to tell (albeit in other people's universes) and wrap them up in a slick, mobile-friendly package with talented writing, great voice acting, and an episodic structure. Why haven't you checked them out yet?

It might be because all those adventure game episodes cost $5 a pop on Android. And I suppose that's fair - since each one will last you about 90 minutes (assuming you only play through it once), it's expensive by mobile standards. 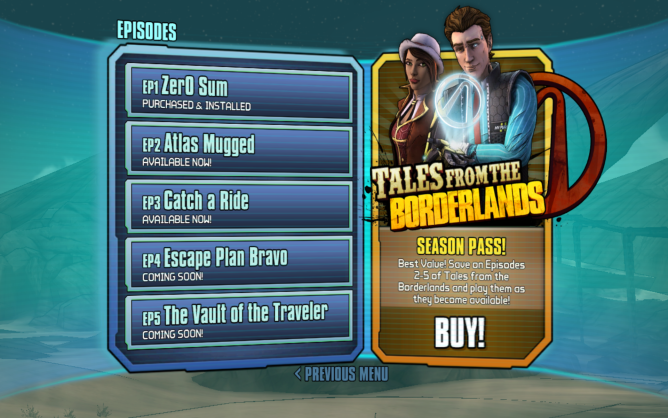 Episode one came in December, with number two following in March. The latest installment places Rhys and Fiona in the jungles of a terraforming facility as they continue their quest to find a lucrative Vault.

Borderlands is a super-popular series of intense, multiplayer-focused first-person shooter games. So it's odd, very odd, that the most exciting thing to happen to the series since the original game came out in 2009... is a single-player, offline, point-and-click adventure title. That's right, TellTale's Tales From The Borderlands adventure series is awesome, and its stand-alone story is more engaging than pretty much all of Gearbox's existing sci-fi lore combined. In my opinion, of course. Episode 2 is available on Android today.

Trailer for the console version - the Android release is mostly the same, but not quite as slick-looking.

The first episode in TellTale's series has been out on Android since December, just a few weeks after it debuted on PCs and consoles.