I'm going to do my best to make it through this article without making a Portal 2 reference, but this new SwiftKey feature is not making it easy on me. After recently announcing Flow, the Swype-like gesture input method, someone inside SwiftKey HQ thought to themselves "Well, you know, this is great and all, but man, what's with all this raising-my-finger nonsense? So inefficient!" So now the company is demoing Flow Through Space.

A nice perk for Android users is an array of other software keyboards. Don't like stock? Don't sweat it. There are tons of others to choose from. Depending on your typing style, there is probably one to fit your needs. Some users like Swype, which allows you to slide your fingers across the keyboard instead of tapping each letter individually. Or there's SwiftKey, which has the ability to read your mind thanks to its incredibly intuitive prediction engine.

Swype's beta client received a major update this morning, and the popular 3rd party keyboard is now at version 1.3, and this major release brings a host of new features like dictionary sync and backup, themes, "hotwords," even more languages, and a new version of the tablet layout. 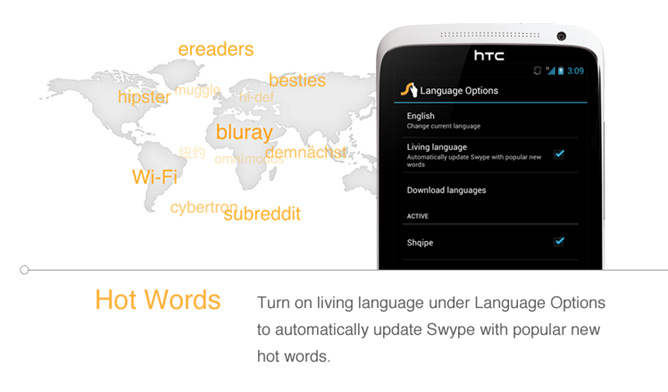 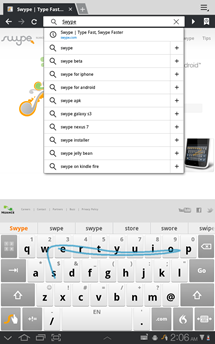 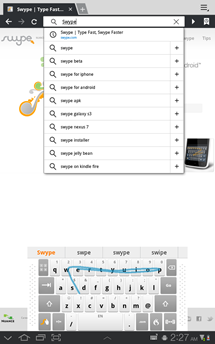 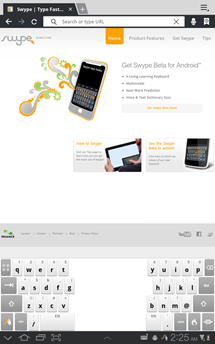 Here's the list of all the new features, in detail:

Dictionary Backup & Sync: Swype now backs up and syncs a user’s personal dictionary across any of their mobile devices.

There's no doubt that Swype is one of the most popular and innovative keyboard replacement apps for Android, albeit for a somewhat niche market. One of the quirks of Swype, though, is that it's basically made for one-handed input, and some users just aren't into that. Enter a new keyboard called Keymonk Keyboard which basically takes the Swype method of text input and modifies it for two-handed input. Check it out:

How is this a four-in-one option? Firstly, you have the traditional Swype method of, well...

A new beta update for Swype has begun rolling out and will hit tester's handsets over the next 72 hours. The big changes, if you couldn't tell by the title, are Ice Cream Sandwich (ICS) support and the integration of Dragon GO! - unsurprising, since Swype was purchased by Nuance and Dragon Dictation support has been rolled in since December. Specifically, the update adds functionality to the "Dragon" key which allows users to dictate speech using the infamous engine, as well as launch the Dragon GO!

Nuance, the company behind Dragon Dictation, bought out Swype almost three months ago, but the results of the deal haven't really been exposed since. No longer -- Swype has just been updated with a "Dragon Flame" key that, when pressed, initiates a voice-to-text system provided by none other than Dragon Dictation. In its current form, it features support for French, Italian, German, and English, with Swype representatives claiming more languages are on the way in 2012.

A new beta version of Swype for Android, version 3.26, has been released, with the chief improvements being automatic updates, 11 new languages, a refined key layout, and enhanced settings in help. Now that they've nearly doubled the number of supported languages, the Swype package has been broken into four: one each for the Americas, Western and Eastern Europe, South-East Asia, and one for all regions.

Read More
Update: Thisismynext.com has confirmed the purchase with Nuance for "approximately $100 million". It's really real.

Nuance Communications. You probably know them as the company that makes Dragon Naturally Speaking, a speech recognition program. Well, they have another little known side project: Nuance loves keyboards. Like, really loves keyboards.

They own the T9 typing style and the company that invented it. They have their own Android keyboard called Flex T9. A little over a year ago, they bought Shapewriter, Swype's main competitor.

Greetings, dear reader! Tell me, how happy are you with your current keyboard? Autocorrect got you down? Looking for something a little different? Well, AP is here to help. Crack those knuckles and  wipe down that screen, 'cause we're doing a keyboard shootout.

I'll bet you the keyboard is your most used app, and you don't even realize it.  Just think of all the searches, texts, and notes you poke out on a daily basis.