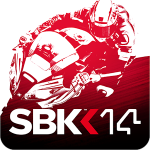 The Superbike World Championship is a chance for riders to take modified versions of publicly available motorcycles to the track in countries all over the world. The 2014 season may be over, but that doesn't mean some Android-toting fans haven't been craving a chance to get a virtual taste of the action. After months of waiting, the timely-released iOS game has made its way over to Google Play. SBK14 is the officially licensed mobile title, offering 13 recreated tracks, 27 real-world racers, and 16 teams including the likes of Kawasaki Racing and Ducati Superbike.