The first developer preview of Android 11 is finally out, and now that there are OTA images we can flash to devices, we're starting to discover more features than what Google mentioned in the official announcement. One of those hidden features is a scheduled mode for dark theme, something that was strangely missing from last year's Android 10 release. Some of the updates seeping out from the Pixel 3 have been pretty innocuous while others are quite significant. The Clock update leans toward the innocuous side as it brings some subtle but pleasing visual changes to its interface. A teardown also turns up part of the sunrise feature that was announced earlier today. The popular calendar app Sunrise was supposed to shut down permanently yesterday, but that didn't happen. Microsoft now says it has decided to hold off on killing Sunrise while it works to integrate more Sunrise features into the Outlook app. That doesn't mean Sunrise is alive and well, but it's not dead at least. Microsoft has announced a series of upgrades to the calendar portion of the mobile version of Outlook. These are mostly borrowed features from the now-defunct Sunrise Calendar, which Microsoft acquired over 18 months ago. A wave of dread washed over fans of Sunrise Calendar when it was acquired my Microsoft in 2015, and indeed that dread was justified. Microsoft ended update support for Sunrise in late 2015, and now we know when the app will shut down for good. The big day is August 31st, so you'll have to find an alternative before then.

In a move that isn't all that surprising, Sunrise Calendar now offers full support for Office 365 accounts. Considering that Microsoft bought Sunrise a few months ago, it was no great leap to expect better integration into that ecosystem. We already saw Wunderlist support added shortly after Microsoft bought them, too. Office 365 joins a hefty list of providers you can use with Sunrise. 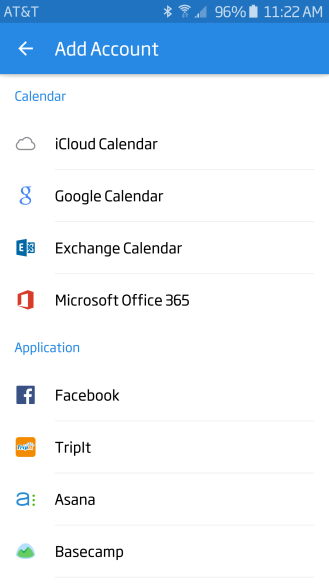 There are many more that I couldn't include in the screenshot above, including another full screen of "application" providers and both Google and Wunderlist, which are already a part of my account.

I didn't need to update my Sunrise app to see the new option.

Let's be honest here: you really don't give a crap about Arbor Day. But if you forget to record the season finale of The Flash, you're going to be out three bucks for a Google Play episode purchase. To help alleviate this first-world problem, Microsoft subsidiary Sunrise Calendar has added hundreds of TV shows across dozens of networks to its "Interesting Calendars" feature, allowing for quick and easy TV scheduling on top of its usual handy interface. 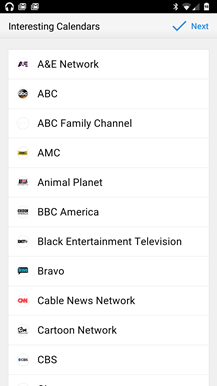 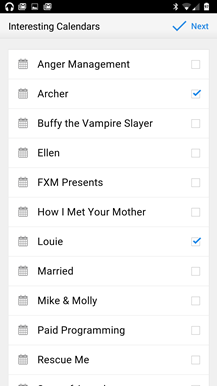 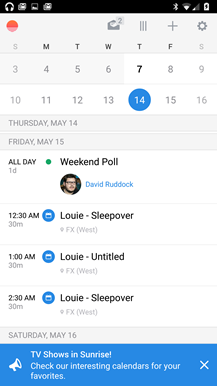 Right now the feature is wide, but not deep. While the TV selection has most of the popular local and cable television networks and both first-run and syndicated shows on offer, it doesn't seem to be capable of distinction between new episodes and reruns.

Last week the scuttlebutt around the strangely popular world of tech corporate acquisitions was that Microsoft had purchased Sunrise Calendar, a good-looking and well-received alternative to built-in calendar apps on Android and iOS. Today Microsoft has stated that yes indeed, they bought it, though they haven't confirmed the reported $100 million dollar price tag. The confirmation came in the form of a YouTube video that has oddly been set to private, but various news outlets including VentureBeat got a look at it before it went dark.

Like any company out there, Microsoft wants you to use its products. In those cases when you choose not to, it reserves the right to buy whatever it is that you actually are using. That way you're happy and you're still using Microsoft's stuff. Everybody wins, in a way.

The company's latest acquisition, according to TechCrunch, is Sunrise Calendar. It reportedly dished out over $100 million to seal the deal.

Sunrise Calendar is available for a number of platforms spread across mobile and desktop. Want it for Android? There's an app. Want it on your laptop? You can get it for Chrome.