File storage on Android has been a complicated subject over the years. It started very simply with private folders for each app and a pair of permissions for read and write access to just about everything else. The seeds of change were planted with Honeycomb when Google quietly closed off write access to secondary storage like SD cards, but most people didn't take notice until Google insisted OEMs enforce the same rules in KitKat.

Each year since, new APIs have been introduced to give developers new ways to work with the filesystem or even abstract it out of view while also improving security and maintaining privacy.

Over the last few years, few topics have been more hotly contested by Android users and developers than how SD cards are handled by the OS. Back in February, I discussed some of Google's changes during the transition from Android 2.3 to 4.0, and then how more recent policy changes ultimately led to 3rd-party applications losing most of their access to removable storage. By the time I/O came around, Google acknowledged that KitKat's newly added Storage Access Framework still didn't offer enough range for apps to get their work done. With the release of the L Developer Preview, new APIs were added to allow apps to request access to directories owned by other providers.

In recent years, Google hasn’t exactly been known as particularly hospitable toward SD cards with regard to its Android operating system. This theme is most often associated with the Nexus line of devices - the Nexus One was the only such handset to ever offer expandable storage. But despite arguments from Dan Morrill and Matias Duarte suggesting this stance is about keeping the Android interface simple and file picker-free, people still want more space. Google is apparently firming up its position on expandable storage even further, though, and in a way that limits flexibility and changes how we can use it.

Android 4.4 introduces a new interface for accessing files from within apps. Traditionally, trying to upload a file - say, to a social network - created a popup asking which source to pull it from. Now apps will open a sidebar navigation menu that lists all the available options, and Box has already rolled out an update adding support for it. 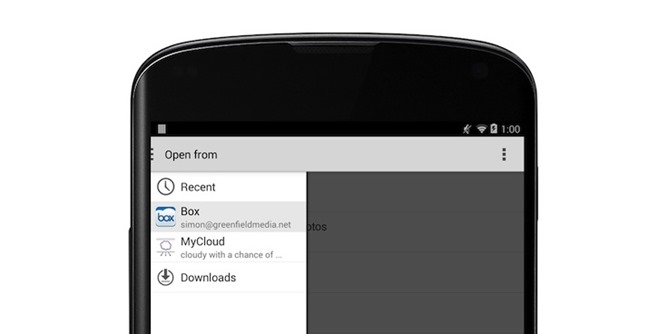 By default, the new storage access framework only shows local files and Google Drive, but any app that has added support will also appear. This will take no effort on the user's end. If you have the latest version of Box installed, it will appear as an option.

Many mobile users who regularly access their files across multiple devices have found that relying on cloud storage just makes life simpler, but many of us don't keep our files stored in just one place. Now Android 4.4 is rolling out a new way to open files within apps that makes accessing all of these providers both easier and prettier. With KitKat's new storage access framework, apps that prompt users to browse for files will open a sidebar navigation menu that lists recent files, available cloud storage providers, and files stored internally. 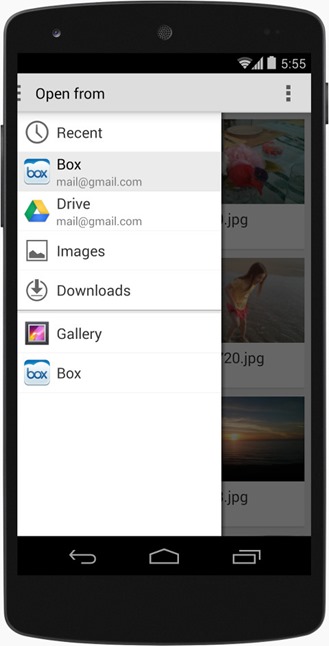 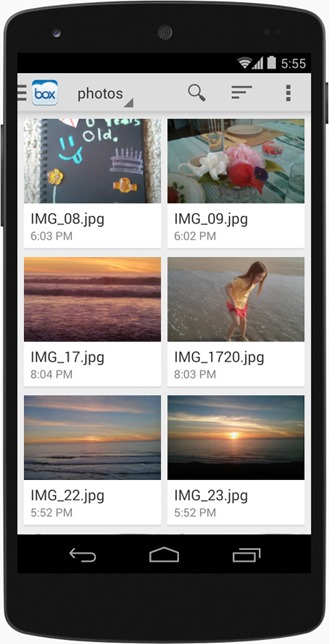 This new system is far more attractive than the popup window Android apps currently toss up, and it provides a more intuitive experience.