But unfortunately, TrackID will be discontinued as of September 15 according to a new notice that's showing up for users inside the app. Sony doesn't give a reason beside businesses needing to move forward, but it's likely that the service was requiring a lot of data, music deals, and maintenance to stay on top of releases and those are resources Sony can't afford anymore. SoundHound may have just become one of the best ways to listen to Spotify on your phone. The app has had Spotify integration for years, first allowing you to add songs you find to your Spotify playlists, then stream these songs with LiveLyrics and listen to curated playlists, and now it has added full playlist support.

What this means is that you can now connect your Spotify account to your SoundHound account and see all of your playlists. Spotify premium users will be able to stream all of their songs from SoundHound with one main benefit: LiveLyrics. This lets them follow along with the lyrics to the song and double tap any line to jump ahead, replay, or skip. It can be hard to keep up with all the major voice assistants - Google Assistant, Siri, Cortana, Alexa, the list goes on. SoundHound, perhaps best known for its music recognition app, has been working on its Hound voice assistant since 2015. At CES, SoundHound announced they have partnered up with Onkyo and Shenzhen to produce Hound-powered speakers and robots, respectively. SoundHound is a bit like Shazam, but on steroids. If it wasn't for Shazam's integration with OK Google, SoundHound would be the only music identification app I have on my phone, because it doesn't just do searches of music playing around you, it can also recognize songs you sing or hum. It works more often than you'd think, even with a couple of missed lyrics, out of tune notes, and even half-accurate hums.

SoundHound also has the benefit of the Hound voice assistant, which means that you can ask it to identify a song, add it to your Spotify playlist, get information about artists and releases, and more without touching a single button. The music discovery app SoundHound has introduced its own voice control feature, which is triggered by "OK Hound." This means SoundHound can be used hands-free in the car or at a party when a cool song comes on and you want to impress your friends with your music knowledge. However, it only works when the device is awake and SoundHound is open.

Google's various flavors of voice control are neat, not to mention extremely useful thanks to deep integration with Android. But Mountain View doesn't have a monopoly on speech interpretation: Microsoft has made a pretty compelling case for its cross-platform Cortana system, to say nothing of the similar entries from Apple and Amazon. SoundHound threw its hat in the ring last year with the semi-proprietary Hound app, though you had to be part of the beta to check it out. Today Hound gets a public launch, and everyone can play with it with no prerequisites.

Tech companies regularly spin their products as innovative revolutions that disrupt existing standards and push humans further along the evolutionary tract. So when each new app comes along with promises of raising the bar, it's easy to be skeptical. Just because SoundHound recently released a competitor to Google Now, that doesn't mean it will be any good.

Well, from the looks of the latest video to appear on Hound's YouTube page, the voice assistant's natural speech recognition is actually pretty amazing. In the demonstration, we see Hound speedily respond to obscenely specific inquiries, such as: "How many days are there between the day after tomorrow and three days before the second Thursday of November of 2022?" The answer, according to Hound, is 2714 days between the day after tomorrow and Monday, November 7th, 2022.

Google isn't the only word that can follow OK. SoundHound has developed a voice assistant of its own, and while the project is still in invite-only beta, the newly available app is clearly going after Google Now. From the moment you utter the words OK Hound, you know you're in for something similar, but different. SoundHound thinks Hound is special due to its ability to better understand speech. The assistant responds to naturally phrased questions and can handle detailed inquiries. The example in the provided screenshots shows Hound responding to: "Show me hotels in miami with availability monday staying three nights between one hundred fifty to two hundred fifty dollars that have a pool and are pet friendly."

The provided results, if accurate, are more informative than the general search Google dishes out.

SoundHound is one of the apps you can use to recognize those songs you hear playing in the background, whether it's in a commercial or in a department store. Now its developers are bumping things up to version 6.3 and giving everything a spiffy new look. 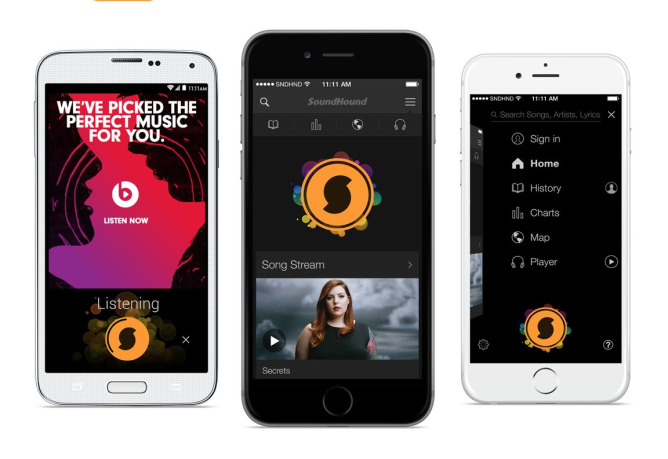 The interface above will probably look similar across platforms.

Overall, everything is still dark and looks generally SoundHound-y, but stuff has moved around a bit to make music more discoverable. That's what the changelog says, anyway. You can access the search and navigation buttons from anywhere just by swiping from the right. When you're on the home screen, you can view your recent searches and see what's currently popular.