It's hard to believe that it's been nearly three years since we reviewed Soundfreaq's original Sound Kick portable speaker. Over that period of time, we've seen a slew of new offerings from the company, including a few ultra-portable options, an alarm clock speaker, and a handful of others. The Sound Kick was really a groundbreaker for us though - it had standout features unlike any other speaker at that time.

Fastforward to today, and the SK's successor is finally here. The SK2 takes a lot of what made the original so great, including a tilting design and UQ3, and improves on that.

I really dig Soundfreaq speakers. In my opinion, they offer some of the best bang-for-your-buck you can get in the portable speaker market. And if you're on the hunt for a good ultra-portable speaker, you'd be hard-pressed to find something better than the Pocket Kick. It's a little-bitty thing that makes not little-bitty sound. In fact, I reviewed it a while back and did a comparison between it and the Jawbone Jambox Mini. No contest. 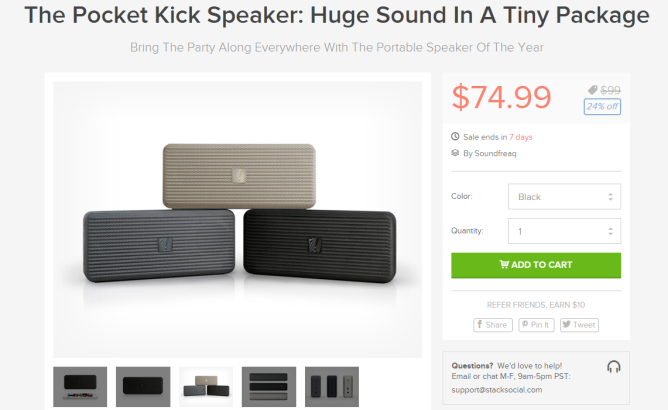 For the next week, you can grab this little guy for 24% off the normal price of $99 from StackSocial. (That's $75 for those who don't want to math...or

I love Soundfreaq speakers. They offer big sound in a small package, generally look pretty damn good, and are always very reasonably priced. I reviewed the Double Spot a few weeks ago, which is probably my favorite Soundfreaq offering to date – it's a killer little speaker for $150. BUT! If you want it for fewer dollars, now's the time to buy. For the next two weeks, Stack Social is selling this mid-century modern speaker for $112, which is 25% off the normal price. 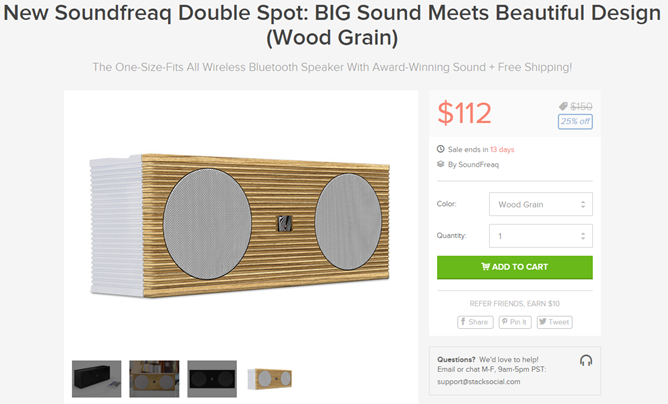 Both the black and wood grain speakers are available (the latter is my personal favorite), and shipping is free.

Almost a year ago, I reviewed the Soundfreaq Sound Spot, a speaker that's mid-century modern design is eye-catching to some (like myself) and not so appealing to others. As polarizing as the design may be, though, there's no denying that it's a killer little speaker for the money. For this year, Soundfreaq doubled up on the speakers, added a couple of new tricks, kept the same sexy design, and called it the Double Spot. I've been playing with the Double Spot for a couple of weeks now, and have to say I'm impressed. Soundfreaq typically delivers solid sound quality for the price, and the DS is no different.

When it comes to pocketable speakers, there's generally one in particular that most people think of: the Jawbone Mini Jambox. Jawbone really made a name for itself with the original Jambox (which is really portable enough in its own right), so the only logical thing to do was make a larger version (the Big Jambox), as well as a smaller, more pocketable version.

Up until now, Jawbone hasn't had a lot of competition against the Mini Jambox, especially in the $100(ish) price range. SoundFreaq is looking to change that with the Pocket Kick, a smaller take on the company's Sound Kick speaker.

We've reviewed many Bluetooth speakers here at AP (I myself have penned many of them), but I'm not sure we've ever taken on anything like the Sound Rise from Soundfreaq. It's an inherently different sort of speaker, as it's really more than just a Bluetooth speaker – it's a Bluetooth alarm clock.

I'd like to think there are two kinds of people in this world: those who use their phone as an alarm clock, and those who have a more traditional buzz buzz buzz alarm clock. The Sound Rise, in my opinion, is the perfect combination of the two options. I personally can't stand being woken up by a jarring beep or eeenngghhh sound, but my phone oftentimes isn't loud enough to wake me.

The amount of Bluetooth speakers on the market is mind boggling. Not only has every brand that ever made a speaker in the past throwing its offering into the arena, but the category has brought forth many new contenders as well, each of which claiming theirs is the "best." That's actually a silly assertion, as best is completely subjective. But I'm getting off topic.

The way I see it, finding the right Bluetooth speaker for you isn't all that daunting of a task. Simply identify what you want in a speaker - portability? Volume? Excellent sound quality? Features? Something that will easily blend with any decor?

Soundfreaq isn't the best-known player in the Bluetooth audio market, but if you haven't checked them out, there's never been a better time to try. The company's new Sound Platform 2 is a heavy-hitting stationary speaker system with a set of pipes that really sing, and a genuinely useful dual-speaker pairing mode (read on for more about that). 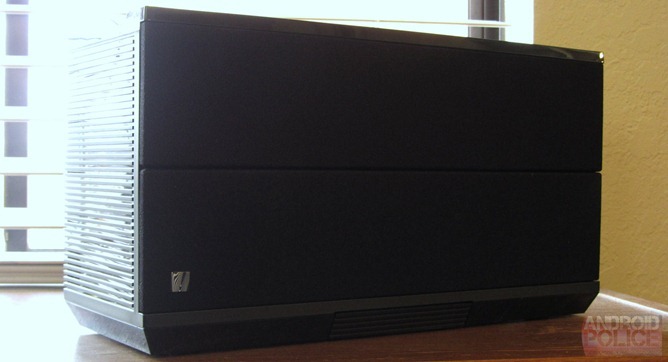 I reviewed Soundfreaq's Sound Kick last year, and came away genuinely impressed. It's still my go-to portable speaker around the house, and occasionally travel. I can't wait for the follow-up. The Sound Platform 2 represents Soundfreaq's more stationary aspirations, in that it's tethered to a wall outlet - this big guy can't go wires-free (yet - a battery pack will be sold later this summer).

I am sort of becoming the Bluetooth speaker guy here at Android Police, and the more such products I review, the more I find I'm not impressed with a lot of the current market leaders. Most of all, I'm unimpressed with their price-to-performance ratio. So often, Bluetooth speakers overpromise with buzzwords like "amazing clarity," "deep bass," and "rich sound" (how the hell is sound rich?). I get tired of it, especially since most of these promises are meaningless, recycled advertising drivel that belongs on a late-night infomercial. You have to separate reality from marketing-speak. Luckily, today, I haven't had to.