You might know Activision Blizzard as the mega-publisher behind huge franchises like World of Warcraft and Call of Duty. And you might know King as the mobile publisher behind Candy Crush Saga, the Bejeweled clone that's inexplicably become one of the most popular casual games on the planet. In a few months the two companies will be one and the same: Activision Blizzard has announced its intention to acquire King for a staggering $5.9 billion.

Wear Mini Launcher was one of the favorite tools in the opening months of Android Wear. Back when the platform's utility was somewhat limited, it was the best way to manually start a Wear app. Of course that utility has become somewhat redundant now that Wear has been updated with an integrated launcher. Even so, the gesture activation function still makes Wear Mini Launcher one of the easiest ways to quickly activate a Wear app without using voice control.

Unfortunately, Wear Mini Launcher seems to have gone the way of QuickPic. On his Google+ community dedicated to beta releases and feature requests, developer Nicolas Pomepuy announced that he sold the application to a new developer. Last week a Wall Street Journal report suggested that Microsoft and Mojang were considering an acquisition worth upwards of $2 billion, and a Reuters article later stated that an announcement would come today, revealing an agreed price of $2.5 billion. Now it's official. Mojang's Chief World Officer Owen Hill has taken to its blog to confirm that the two and half billion dollar acquisition is definitely happening.

Speaking for Minecraft's creator, Hill says in the post that it was never Markus Persson's - known as Notch - intention for the game to get this big. Being the majority shareholder of Mojang left him with the responsibility of owning a company with global influence.

It was only about six weeks ago that we were reporting on the shiny new Android app from Sold, the dead-simple aftermarket service that promised to make getting cash for your used gadgets and other semi-precious items as easy as dropping them in a box. This morning the company announced that they had been acquired by cloud storage giant Dropbox for an undisclosed sum. 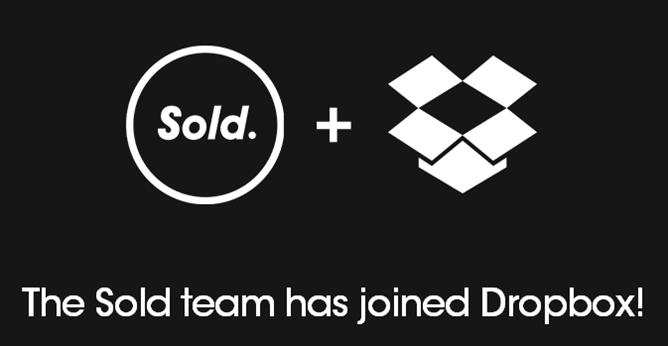 As of now, Sold is not accepting new items for cash sales. The announcement instructs those who are currently waiting on a payout to hold tight - they'll be contacting potential claimants individually. As of Tuesday morning the Sold app can still be installed from the Play Store, but trying to add any new items will result in an error message.

It's not too difficult to sell stuff online. There's eBay, Craigslist, and any number of online marketplaces just waiting for you to sign in and let go of your discarded items. But here's the thing, these sites require users to pass a certain laziness threshold, and frankly, many of us aren't willing to bother. That's where Sold comes in. This app will sel your stuff for you, ship you a package for shipping, and give you your easily-earned money. All you have to do is snap a few pictures and tape up a box. It doesn't get much easier than that.