External battery packs come in all shapes and sizes, but there's something about a solar panel that makes me want one more. I conjure up images of a battery that never dies and never needs to be charged, that can get me through a power outage after a summer hurricane with an overabundance of energy.

In reality, ZeroLemon's Solar Juice power banks might reach a full charge after several days of optimal sunlight. Fortunately, they're good external batteries in other ways. They're water, dust, and shock resistant. They come with two USB ports. They also offer a flashlight. Then there is the generous capacity.

Like you, I love external battery packs. I especially like ones that don't require you to plug them into the wall. Okay, ZeroLemon's SolarJuice backup chargers aren't quite there yet—you could easily spend a weekend getting enough power from the sun to recharge your phone once. But boy, there's something about having the option that sure feels awesome. And I live in a part of the country that's not unfamiliar with losing electricity for days due to hurricanes, so there's that.

An external battery pack can provide some peace of mind, but what happens if the power's out long enough to drain it down? Or what if everyone requires more juice on the next camping trip than you plan for? What charges the chargers?

It's when thinking of those moments that a solar-powered external battery back sounds really compelling. So here's the deal. StackSocial is currently offering a ZeroLemon SolarJuice 20,000mAh external battery pack for $49.99, 50% of its usual price. 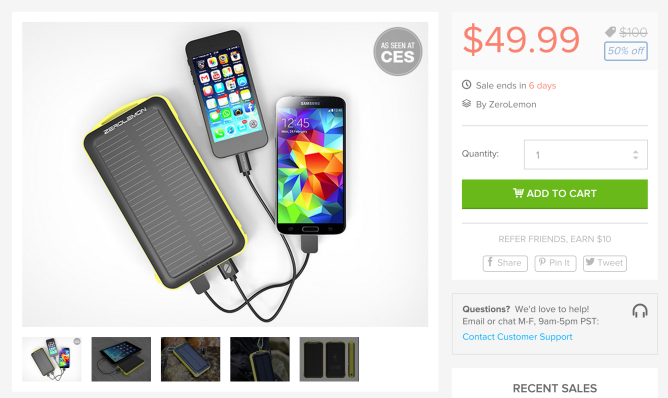 The unit comes with two USB ports (2.1 & 1A), so you can power multiple devices at once. You can recharge the pack itself through its microUSB port or the 1.2W monocrystalline solar panel that lines the top.

Smartphones are awesome, but with a few notable exceptions, it seems their awesomeness is inversely correlated with their battery life. The more powerful a phone is, the faster it dies. Want a beautiful 1080p screen stretched across just five inches of slate? Most of the battery will go towards pushing those pixels. But there's a technology out there that could theoretically free us from the tedious cycle of constant recharging. Chinese electrics company TCL Communication, who owns Alcatel, is working with French company SunPartner to integrate Wysips Crystal technology into smartphone screens. This ultra-thin transparent film draws power from both natural and artificial light.

If there's one thing we're all fond of here at AP, it's power on-the-go. Portable chargers, extended batteries -- whatever it takes to keep our gear charged up. There's one issue with all of these options, though: they also have to be charged. Granted, once a portable charger is all juiced up it usually lasts for a while, but wouldn't it be nice to have something that practically juices itself? Enter PowerSkin's upcoming line of solar chargers.

Planned for a February release, PowerSkin will be dropping two new chargers that incorporate solar charging technology, the SolarCharge and KeyCharge. Both names are pretty self-explanatory, but here's the long and short of it: