Fast charging can be a difficult topic to wrap your head around. There are a lot of competing standards, all with different cables and power adapters, but one of the most popular is Qualcomm's 'Quick Charge' technology. There are different versions with different charging speeds, but QC 2.0 and 3.0 are still common to find in today's phones and tablets.

Sony Mobile, despite its lackluster presence here for the past few years, is gradually re-entering the US market. The Japanese company's latest flagship, the Xperia XZ, went up for pre-order a little over a week ago, and it's now available for purchase. Unfortunately, at $700, I don't see the XZ helping Sony's dwindling smartphone business much. After more than a few leaks, the LG V20 is now official. Revealed less than an hour ago in San Francisco, the V10 successor maintains the G5's design and many of its specs while adding several touches that make LG's V series devices unique. The HTC family welcomed a new member yesterday – the HTC 10. From our initial impressions, it's a pretty sweet phone that packs some impressive hardware and software. However, the 10 isn't the only phone HTC makes, and it can be difficult to keep track of changes from one product generation to the next. With that in mind, I've put together a handy-dandy chart for you, our dear readers, so you can compare HTC's last three flagships spec by spec*.

As you can see, the HTC 10 is bigger, faster, and more powerful than its predecessors, but it also comes at a steeper price. Right before it announces its new device in the Galaxy S line, Samsung always hypes things up by unveiling bits and pieces of the phone's internals. Late last year, we learned that the Exynos 8 Octa was ready for mass production and for inclusion in the newest S flagship. Today, Samsung has let loose a few more details regarding the actual process of building this new processor.

Its predecessor, the Exynos 7 Octa, was the industry's first chip built on a 14nm FinFET logic process and Samsung is reiterating this year with the second generation of this technology. Thanks to optimizations and transistor structure improvements, the new 14nm FinFET LPP (Low-Power Plus) process delivers up to 15% increase in speed while consuming 15% less power compared to the previous 14nm FinFET LPE (Low-Power Early) process. The reason for that has literally nothing to do with Letv: it's all about Qualcomm. The Max Pro is the first phone with a Snapdragon 820 processor, a chip enthusiasts have been eyeing intently after a dismal year, in large part, for Qualcomm's Snapdragon portfolio. Qualcomm gave a brief reveal of the upcoming Letv Max Pro smartphone, the first announced device equipped with the company's Snapdragon 820 processor. Few details about the phone were provided - basically none - but we know it has an 820, Qualcomm's nifty ultrasonic fingerprint authentication system (it's on the back of the phone), and WiFi 802.11ad, also known as WiGig. 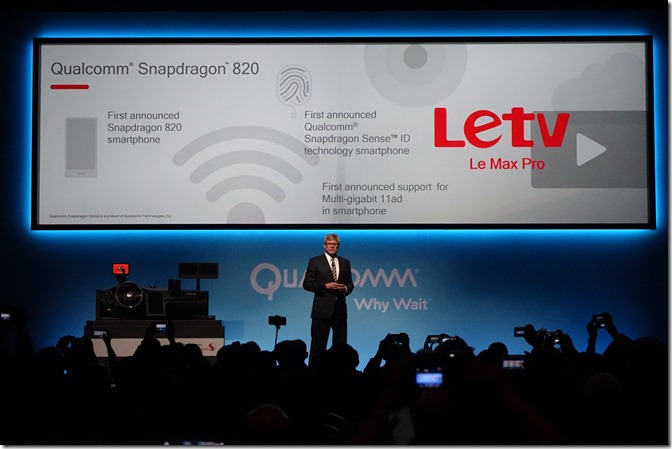 Qualcomm provided a few updates on Snapdragon 820 generally, saying the chip has secured over 80 design wins at this point, which is no small number for such a powerful - and pricey - mobile SoC. 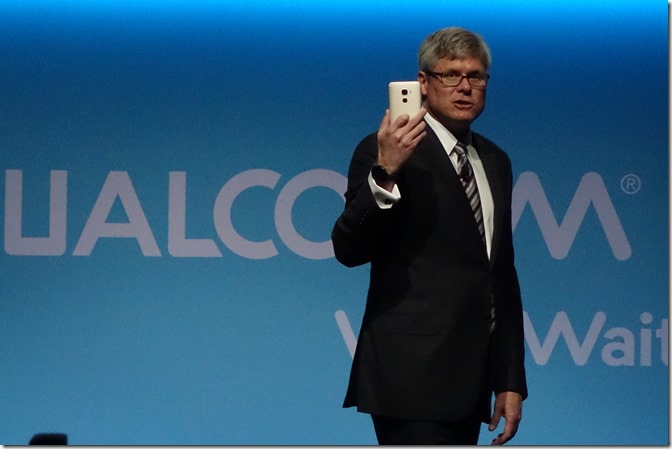 The Letv Max Pro remains largely a mystery until we hear more from Letv themselves, though Qualcomm CEO Steve Mollenkompf did briefly show off what looked like a functional device on stage.

The Snapdragon 820 is far from a secret, but today marked the official "launch" of the upcoming chipset from Qualcomm in New York. The 820 is a huge bet for Qualcomm on the future of its high-end SoC business, marrying the latest technologies across the board for what it hopes will be the ultimate mobile processor.

The 820's full specification sheet, such as it is, is below. 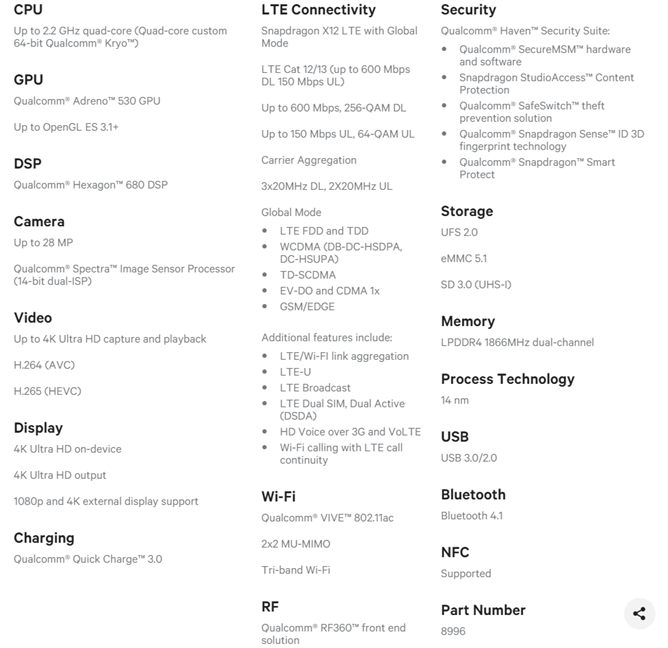 The 820 will be manufactured on a 14nm FinFet process, sporting four brand-new Kryo CPU cores designed by Qualcomm. This marks a departure from the ARM reference cores Qualcomm has used exclusively on its 2015 lineup and which have arguably been a source of woe for the company this year.