No one is more tired of hearing the word "magic" applied to gadgets than I am. For the iFrogz Boost, though, I'm willing to make an exception. This device promises to amplify the sound coming out of "nearly any smartphone or digital media device" sans wires, Bluetooth, setup, or syncing. For once, in a parade of lofty promises coming from every corner of the tech sphere, a device not only makes a grandiose guarantee of convenience and ease-of-use, but actually delivers.

Flickr is finally available in the form of an App for Android, a mere two years after the photo sharing service made its app debut on iOS.

The app includes a built-in camera interface with focus and flash adjustments, as well as filters and effects for editing photos on the fly. 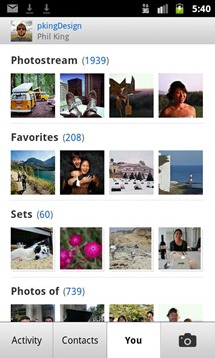 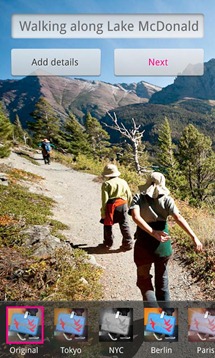 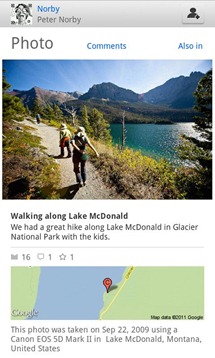 Flickr's Android app also allows for sharing via your Flickr account, Facebook, Twitter, Tumblr, or email. Users can also browse their photo stream, contact photos, or profile, and utilize a feature called "infinite scrolling," in which all your photos are displayed on one page.

Just when you thought you were sick and tired of Angry Birds news (I certainly was), Rovio Mobile has unveiled an intriguing new spin on the classic throw-the-birds-at-the-pigs gameplay, and it involves the much-ballyhooed NFC chip found in the Nexus S.

It's not available just yet, but it appears that in future releases of Angry Birds, you'll be able to utilize a previously Nokia-exclusive feature called "Magic." Simply bump your phone against a friend's to unlock new levels or share existing gameplay elements.

As much as I love Android, I do have friends and family that are dedicated iPhone users. There has always been a barrier between the two platforms, but that is slowly changing with things like cross-platform games and now, thanks to Qik Video Connect, video chat.

Aside from being cross-platform, Qik Video Connect offers several other nice features, like video mail. If you can't connect live with someone and you just have to show them something, then video mail is the only way to go, right?

Bump, the popular app that lets users share photos, contacts, and apps by simply bumping their phones together has hit the big two-point-oh today. This update brings many enhancements along with it, including a new UI and a nice performance boost. 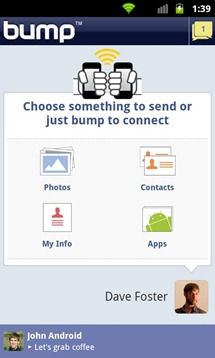 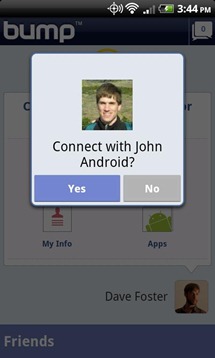 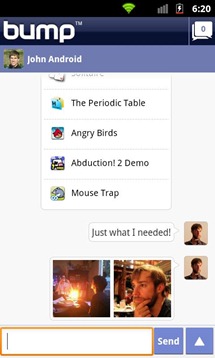 Not only does it look prettier, but it's more functional as well. The app now stores a complete list of everything that you've sent or received via Bump, including when and where you were at the time of the transaction.