Adding an entry to the long list of novelty photo apps in the Android Market, SilkenMermaid has introduced TurboCollage - an aptly named app that allows users to make "picture pile" collages in just a few moments, with a surprising amount of control options. 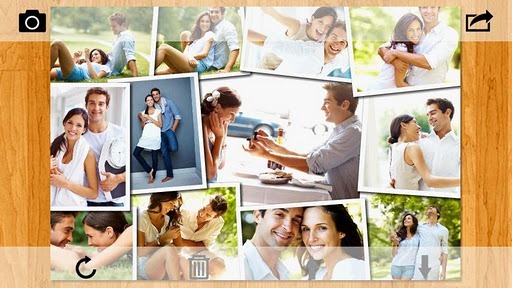 Once you selects images to be included in the collage, the photos can be rotated, resized, scaled, and layered, to create a collage that perfectly matches your vision.

We know Android continues to grow at an amazing rate, with 500,000 Android devices activated per day and an activation growth rate of 4.4% per week (as an aside - if that growth rate is correct, that means the number of activations would double roughly every 16 weeks, based on the Rule of 72.) But how is that raw growth reflected in market share, given the rapidly expanding smartphone market?

If you have ever tried to do tech support for someone on the go, needed to remotely see how exactly somebody did something on their computer, or found it necessary to view another person's screen from your smartphone for some other reason, you're already well aware of the frustration that arises from not having your computer handy. Fortunately for you, you've got an Android phone, and I've got the perfect tool for you.

According to the latest from ad network Chitika, Android market share is far more lopsided than you probably imagine. That Verizon is the largest is perhaps not surprising, given the data we've seen time and time again. What is surprising is just how much of a lead they have: the company accounts for a whopping 51.4% of the market. Sprint comes in at second with 25.3%, while T-Mobile pulls up third with 16.8%.

RBC Capital Markets analyst Mike Abramsky  has run the numbers on tablets and lined them up for comparison against a bevy of other figures. Surprisingly, there are 5.113 billion mobile subscribers in the world (out of 6.898bn global population), but only 394 million smartphone and tablet users.

Abramsky's calculations show that there will be more than 400m tablet users by 2014. Equally as impressive is that he thinks 185m tablets will be sold in 2014 - or 47% of the number of smartphones and tablet owners today.

After the recent arrival of Chomp for Android, yet another Market alternative has popped up. An intriguing new application called [K]apps!, which strives to make app discovery a little easier with the help of social networking, went live on the Market today. According to the developers, the app is "dedicated to the sharing and discovery of Android applications with your contacts." [K]apps! offers a new take on mobile app vending that hopes to make it easier (and possibly more fun) to discover new programs.