It would appear that the pre-registration for Shadowgun War Games was announced last year, though the title has been missing in action since that announcement. Thanks to a recent press release, it's clear that Madfinger Games hasn't given up on the title, and is now offering a beta sign-up on its website, and since registration is open to anyone, only so many slots in the beta will be available, so make sure to sign up soon, or else you may miss out. Mobile gaming has been getting pretty intense in the last few years, due in no small part to increasingly powerful hardware available to shove into phones and tablets. Games like Clash of Clans and Hearthstone have served to push the mobile platform forward into general popularity, something that the rest of us gamers can appreciate. Hoping to take full advantage of what we have available now, developer Madfinger Games has released a teaser trailer for their upcoming addition to the Shadowgun franchise: Shadowgun Legends.

For those of you who never played the original game, it is a third-person shooter set in a dystopian future where corporations rule in place of governments.

If you're a DeadZone player, there are now more ways and places to play than ever before: as of today, the game is also available on Facebook and PC. Mac owners, fret not – it's coming soon to your platform as well. This means you can now get your DZ fix regardless of where you are – all games are cross-platform, and you can log in with your existing credentials. 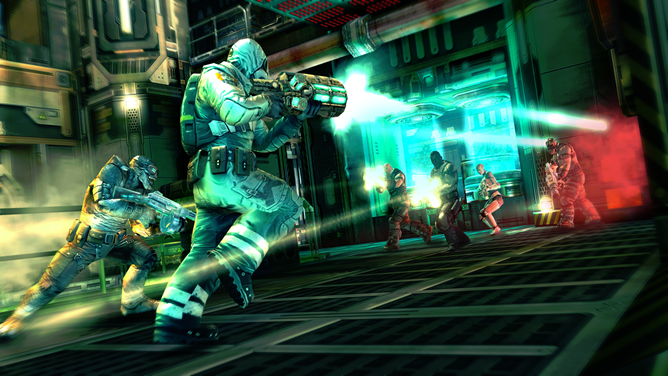 For those who aren't already playing DeadZone, you're missing out on one of the best multiplayer games to hit Android in... well, forever. Staying true to its name, DeadZone delivers familiar ShadowGun gameplay – but this go you're not slaying mutants, but other players.

When it comes to buying apps, I try to wait until a sale comes along. I usually end up buying things on a whim most of the time anyway, but I try to wait – especially for games and such that may be outside of who much I'm willing to spend on one app. If you're also the type who waits for a good sale to roll around, some pretty decent price drops just hit the Play Store sales floor.

A nice variety of apps there: a couple games, a reddit browser, a barcode scanner/organizer, and a fitness tracker.

Wonderful news for the roughly everyone on the planet who plays Shadowgun: Deadzone: a whole bunch of new stuff is rolling out today! Notably, there's the Gangs feature which allows you to create groups of friends to play with. There are also a couple new maps that you can explore. And by "explore" I mean "kill things in."

There are also new weapon upgrades, some additional hats (because every game has to have hats now, right TF2?) and bug fixes and tweaks all over the place. Here's the full changelog:

As a side note: I love the radioactivity symbol for bullet points, Shadowgun developers.

Have you been playing Shadowgun: DeadZone? If not, you probably should - it just got quite a bit better. An update that hit the Play Store today brings support for all devices with Honeycomb and above (it was previously for Tegra 3 only), as well as a handful of other features:

- Now available for Android devices with SDK 3.0 and higher!
- Unlocked Research section - you can use the research to make weapons, items and perks
- You can make money by playing the game
- You can now collect experience points (XP) and level up
- Protection for the beginners (players with RANKS 1-3).

Once in a while, an Angry Birds or Temple Run comes along in the mobile gaming sphere. Games that are able to hook you with their simple but endlessly entertaining mechanics, and an ability to immediately "dive in" to the game at any time, even if for just 5 minutes (or 3 hours).

The problem with those games is that they're generally aimed at an audience that has never played video games, or has but doesn't actually love them. This "casual gamer" is a mass market holy grail that many game developers are now trying to tap into. As a result, there are very few great games on any mobile platform that I would classify as being directed toward gamers, somewhat ironically.

Shadowgun is an amazing third-person shooter with great graphics and surprisingly good voice acting. It even controls well, for a touchscreen shooter. Samurai II is a top-down hack and slash adventure game that is similarly lovely to look at with its neat cell-shaded vibe.

For the unaware, Dead Trigger puts you behind the gun in the ongoing unholy war against the undead - it's kill or be killed eaten in this post-apocalyptic action-horror thriller. And, starting on Monday, July 2nd, you can finally live out your dreams of surviving the zombie apocalypse (without fear of actually getting eaten) for just $0.99.

It has all the features that you would expect from Madfinger:

Unfortunately, there's no word as to when the games is expected to release, only that it'll be hitting the Tegra Zone "soon."