The last generation of Google Nexus devices went out with a bang. The Nexus 5X was infamous for its bootloop issue, while the 6P was best known for its random shutdown problems. A class-action lawsuit against Google and Huawei for the 6P's hardware woes was filed in 2017, and last year, it looked like a settlement was on the horizon. At long last, payments are starting to go out to claimants. While governments worldwide are starting to add facial recognition software to public cameras, Facebook has settled its long-term legal dispute concerning its use of this technology to tag people in photos uploaded to its platform. The company has agreed to pay $550 million to a group of plaintiffs from Illinois who argued the network didn't seek their consent when it first started the practice in 2011.

YouTube recently faced some controversy over its autoplay function that ultimately ended up in an FTC investigation. Google's algorithmic selection had a bad habit of leading children away from safe, joyful videos and instead would occasionally point them to violent and inappropriate content. And if that wasn't attracting enough negative attention, it turns out Google also collected personal information on minors and used it for targeted advertising without parental consent, violating the Children's Online Privacy Protection Act (COPPA). Back in 2017, some original Pixels and Pixel XLs started experiencing microphone failures — theorized to be due to a hairline crack in the mic's solder. Google RMA-ed these devices, but the problem persisted in some replacement phones too, and a class action lawsuit was filed the following year. We now have word that Google has agreed to settle this lawsuit for $7,250,000 pending final court approval.

I know, that's some settlement, right?

The Transformer Prime (or TF201 if you're nasty) had its share of GPS problems when it first came out. So much so that the company began sending out dongles to fix the issue. Well, that didn't prevent a class action lawsuit from being filed and, as a result, ASUS has settled the case. What does that mean for you? Well, if you purchased a TF201 between December 1, 2011 and February 19, 2013 and you didn't get a refund, then you qualify to receive $17 and a free GPS dongle.

If you want to get in on this class action, you need to submit a claim by May 31st. 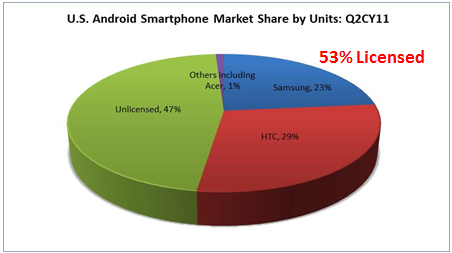 The major holdouts on the graphic above are Motorola Mobility and LG, though Moto is obviously the majority of that 47% chunk of green.

It certainly seems like it. Yesterday, Microsoft announced via blog that it had concluded negotiations with Samsung and reached a licensing deal for the same seven patents it previously licensed to HTC for Android (along with other, smaller Android manufacturers). There were rumblings about just what royalty rate Samsung is paying, but the guess is anywhere from $5 to $15 per handset (it's likely on a percentage-of-MSRP basis - so think about 1-3% per $500 MSRP phone).

When it comes to royalty agreements, rates are usually internally fixed regarding certain categories of IP to avoid confusion about damages in lawsuits, but when there are allegations of continued infringement, the game changes.

As many sites have pointed out, HTC has vowed to appeal the ruling of the ITC.