Like many other countries, all of India is currently under lockdown. There are only a few exceptions from this rule, and going to a Samsung shop to get your device fixed is not among the legit reasons to leave your home —in fact, all Samsung stores are currently closed. The Korean company recognizes this situation and offers extended service for devices that would've seen the end of their warranty during the lockdown period. It's also possible to pick up a pre-booked Galaxy S20 at a later time.

Samsung has shuffled around its leadership quite a bit over recent years, in part due to scandals or rethought strategies. The latest restructuring falls into the latter category — the Korean conglomerate is looking to become more agile so it can better react to its rising Chinese competition. The company has thus appointed the Galaxy devices leader Roh Tae-moon as the new head of the smartphone division, making him the youngest Samsung president at 51.

This could be introduced to a jury as evidence that Samsung had reason to believe, at the point the Galaxy Nexus was designed, that their other products could be infringing on Apple patents.

Samsung sent out invites today for Samsung Mobile Unpacked 2011, promising to reveal "what's new with Android" at the event in San Diego on October 11th. 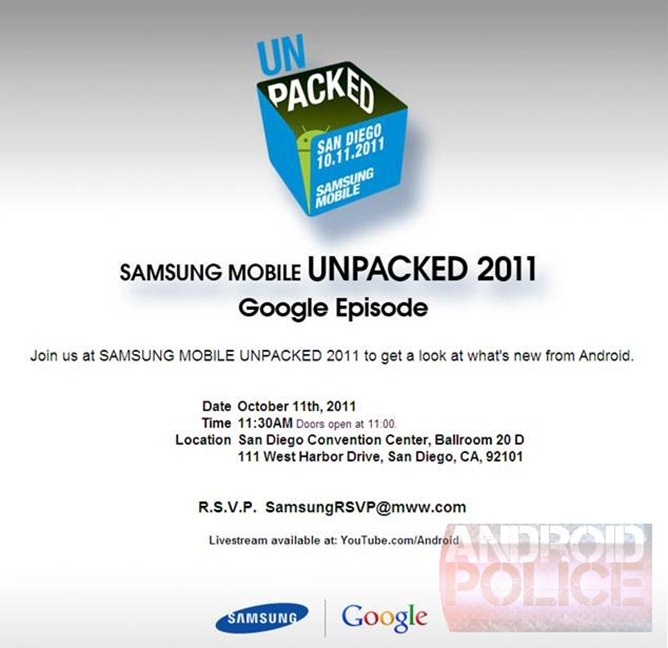 Considering Eric Schmidt's indication of an October/November release for Android Ice Cream Sandwich, and the fact that the Nexus Prime (Google's flagship ICS phone) is said to be a Samsung device,  it's looking like this announcement will almost certainly be related to Android's latest iteration, and perhaps, if we're lucky, the latest Nexus device as well.

For those who don't happen to be hanging out in San Diego for the next couple of weeks, a live stream will also be available to view at YouTube.com/Android

Steve Kondik, better known as Cyanogen, the father of CyanogenMod, has posted an interesting update to his professional life on his Facebook page. Steve, who has founded the largest family of custom Android ROMs on the planet, has just joined Samsung Mobile to presumably work on Android-related goodies for one of world's largest electronics manufacturers.

It's only fitting to see the two masters of their own domains join forces, so here's to hoping the fruits of their labor are going to be beautiful and exciting for us, Android users. I sincerely hope Samsung isn't going to remove Cyanogen out of CyanogenMod and will allow him to remain active in the project.