If you own an Android Wear device right now, chances are you're probably waiting patiently furiously checking for that elusive Android Wear LCA43 update. Well, we've got you covered. As the links to the OTA ZIP files become available, we will post them here. To flash these, you'll need to have ADB installed and have the Google USB drivers from the Android SDK. You'll reboot your watch into recovery mode, then select "Install Update From ADB." You can then run "adb sideload filename.zip" from a command prompt.

Did you remember that Samsung made an Android Wear device? To be honest, I had almost completely forgotten. It seems no one ever talks about that watch, and apparently not many people were buying it either because Google just pulled the plug on the device on the Google Store. When you open the product page you are greeted with this sad sight (or site, your call). 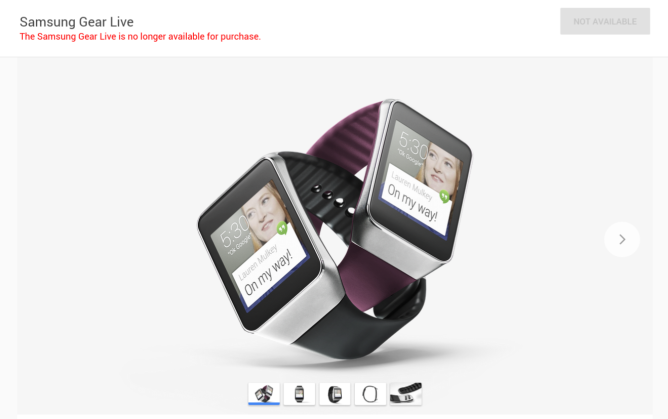 Gone before I've ever seen one in the wild.

Apple has spared no opportunity to advertise how customizable its debut smartwatch is, thanks to the promised number of bands wearers will be able to swap in and out. Unsurprisingly Google wants to take some of the wind out of those sails. The company has taken this moment to highlight a set of straps available for various Android Wear devices from the likes of Clockwork Synergy, E3 Supply Co., and Worn & Wound. Big things are happening for the smallest of Android devices. Over the last month, we've seen several attempts to extend the capabilities of Android Wear, some have worked out, while others haven't fared so well. Most of the activity has come in the form of 3rd-party apps, so there hasn't been much action for dedicated modders. That is, until today. Team Win just posted its first official custom recovery for the LG G Watch (dory).

You saw Android Wear a couple of months ago when Google unveiled the SDK and both LG and Motorola presented the first promotional pictures.

In the video, we see developer Doug Gregory operate his living room lamp by issuing voice commands to his Gear Live.

I'd just like to thank Google for expanding Android to two new platforms this year (Android TV doesn't count). Now we've got twice as many opportunities to talk about over-the-air software updates. The LG G Watch and Samsung Gear Live, both running nearly identical builds of Android Wear, are being updated to the slightly newer KMV78V build today. Owners should be seeing the update alert over the next few days if they haven't already.

Today's Google I/O isn't exactly the coming out party for Android Wear - the company has already demonstrated the wearable platform in a preview form. But for developers, it's the main event: the full Wear software development kit will be available soon, and some of the more esoteric capabilities were elaborated upon. The early portions of the keynote demonstrated the user interface, which we've seen before, but the demonstrated capabilities are nonetheless impressive. 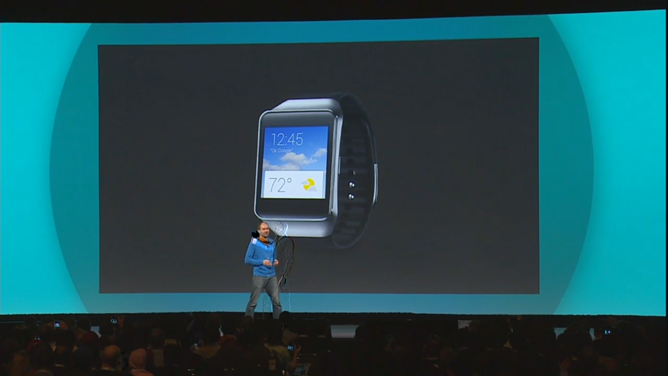