When Samsung officially unveiled the US variants of the Galaxy S II, the spec sheet for T-Mobile's variant was oddly absent from the show. After that, we started hearing that it would not be sporting the same Exynos processor of its AT&T and Sprint siblings, but rather a chip from a "different manufacturer," with no word as to who that manufacturer could be.

Today, though, one Twitter-er had enough with the guesswork and decided to get an answer directly from the source: @GalaxySsupport, the official support account for all US Galaxy S devices.

It's as if Samsung is looking straight into the heart of America with its newest ad for the Galaxy S II, entitled "The Way We're Wired." The ad hits the soft spot in all of us with its chill-inducing analogies of how we all want to be the best, highlighting philanthropists like Martin Luther King, Jr. and superheros like Batman. Have a look:

Kudos, Sammy. I love it.

We've all been waiting for weeks - nay, months - for Sammy to bring the Galaxy S II to the US. Announcement day is finally upon us despite a bit of a delay due to bad weather, but Sammy has already revealed the Sprint version of the GSII, named the Epic 4G Touch, ahead of tonight's event. 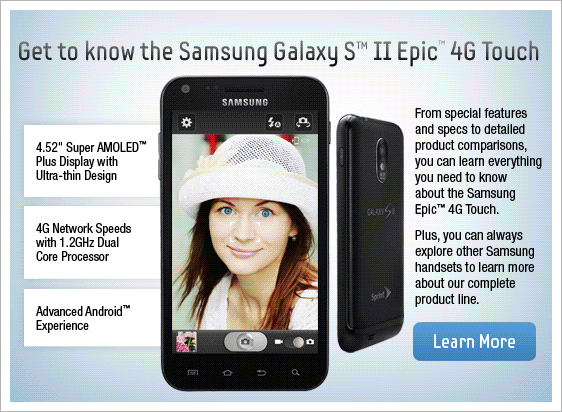 The Epic 4G Touch will sport a larger, 4.52-inch Super AMOLED Plus display, verses the 4.3-inch screen of its global counterpart. 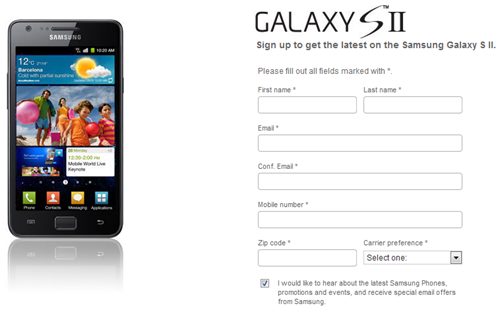 You have to drop in some basic information like name, email, phone number, and carrier preference, and you're in. I received a text message immediately after signing up asking if I want to be notified via SMS as well, so expect nearly-immediate info regarding this device.

Update: Since there are a lot of upset AT&T customers out there, a caring tipster decided to drop a photo over at Android Central that suggests AT&T may be getting a keyboard-less version of the GSII as well. With that said, I will express my absolute skepticism about this. There is but a single picture, and we all know how easily photographs can be manipulated. So, before you get too excited, I urge you all to take this at face value until we get more proof.

Between the imminent release of the HTC EVO 3D, the newly announced Photon 4G, the upcoming Samsung Galaxy S II, and the pure Google experience of the Samsung Nexus S 4G, we have to ask - which device is next for you? To help you decide, here's a break down of each phone's specs: 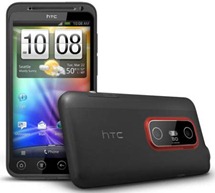 As the follow up to the super-popular EVO 4G, it not only packs a harder punch under the hood, but also includes some groundbreaking features like Sense 3.0 and the inclusion of both 3D playback and video capture.