Chromebooks make for good laptops if you're heavily invested in Google's ecosystem of apps and services. If you're looking to get one now, you might want to check out the recently-launched Galaxy Chromebook 2 that's available for $100 off, starting from $449. These days, there are countless mid-range Chromebooks to choose from - HP's new convertible, the Samsung Chromebook Plus V2, the ASUS C302, and so on. But if you need a dirt cheap model, Best Buy has the 11.6-inch Samsung Chromebook 3 for just $129.99 right now. Samsung announced a pair of Chromebooks back at CES 2017, the Chromebook Plus and Chromebook Pro. The former is powered by a custom ARM-based OP1 processor, while the latter is equipped with an Intel Core M3 6Y30 chip. The Plus was released back in February, but the Pro was delayed - presumably to fix issues with the Android app compatibility.

CES 2017 is in full swing, with laptops, cars, drones, fridges, connected toothbrushes, and other items being exhibited and announced. In lieu of this, Samsung's joining the party, having just announced its new Chromebook lineup via a press release, with the Plus and Pro looking hugely impressive.

A few days ago, Google intro'd a new entry to the ChromeOS family: the 11.6", Exynos 5-powered Samsung Chromebook. At $250, this dual-core ultraportable isn't going to break the bank, and for users who don't normally venture outside of the web browser, it's a pretty ideal solution. And starting today, you can grab this little guy directly from Google Play.

Just to avoid confusion, this does not run Android. It runs ChromeOS. 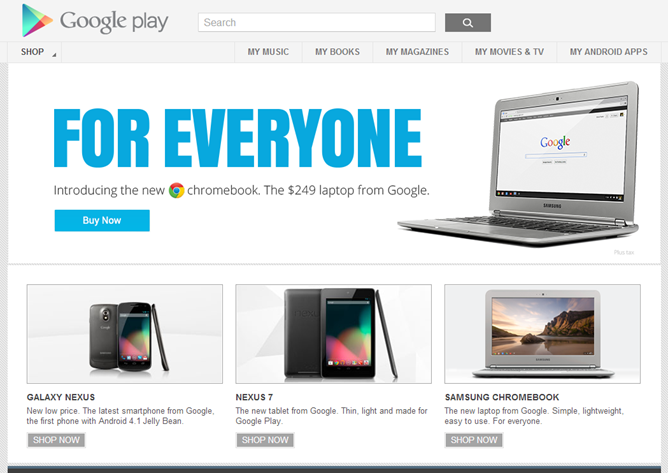 This new Chromebook is the first non-Android device to make its way into Play Store, which is clearly going to be Google's new storefront for future hardware sold directly by the company.