It looks like the ATRIX Gingerbread update that started over the weekend is just the start of a line of updates set to hit all AT&T 2011 model post-paid smartphones by the end of this year. Ma Bell is standing on the rooftop shouting out this glorious news for all to hear, along with a list of the phones that will see Android 2.3 sometime this year:

Once the ATRIX update is complete, the next device to get some Gingerbread lovin' will be the HTC Inspire 4G, with the update rolling out "in the coming weeks."

If you happen to own a Samsung Captivate, HTC Aria, or HTC Inspire 4G, then the dream of many, many Android owners on AT&T is about to be yours - the ability to legitimately sideload apps. AT&T lifted its sideloading-barrier on the newly released Samsung Infuse 4G, and naturally, the question arose: What about older Android devices? Now we have our answer. 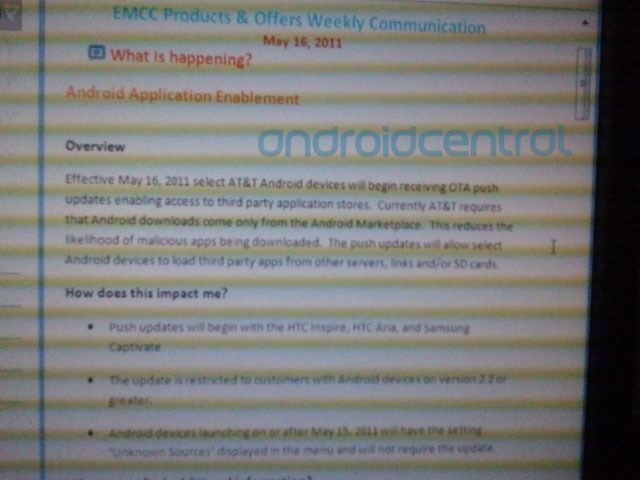 This means that you will be able to enjoy the little pleasures that other Android users currently have - like the Amazon Appstore and non-market apps like wireless tether.

I'm usually not too fond of carrier's bloatware, manufacturer's skins, and other causes of lag and potential frustration for end users (not to mention that I'm especially skeptical when it's coming from AT&T), but AT&T's new U-verse Mobile app for Android isn't looking too bad. To be clear, this isn't anything new; the app's already been available for the iPhone, the Blackberry, and the Xbox 360 in addition to being available on Windows Phone 7 devices at launch, but now it's made its way to our operating system of choice!

Samsung just sent out a press release that should help dampen the dullness today: according to Samsung, they've shipped over 1 million Galaxy S devices in the US. Not bad, especially considering they've only launched on 2 of the 6 carriers that will be getting the device. With such a hotly-anticipated and well-received line of devices, it's likely sales are really just getting started - after all, the Vibrant and Captivate only launched just over a month ago.