After an incredible amount of leaking, Samsung's Galaxy Note8 is finally official. However, it's quite pricey at around $950 outright. Samsung realizes that their phones are on the expensive side, so it's offering two freebie options: a Gear 360 camera, or a 128GB microSD card and a Fast Wireless Charging Convertible pad. However, Sam's Club is taking this a step further and is offering up to $469.99's worth of extras in total. Walmart (the parent company of Sam's Club) has been testing a service called Shop & Go for several years now. The idea is that you shop normally, scan in items with a barcode app, pay from the app via a credit card/debit card/store payment system, then just walk out the door - no need to go through a checkout line at all. Previously the program was limited to only a few hundred stores and it only worked on the iPhone, but it looks like the company is ready to put a more widespread version out for the Sam's Club bulk retailer stores. The Samsung Galaxy Note7 is available for pre-order across the internets with a few freebies. There are a few variations in the deals you can get, but they're mostly the same. Sam's Club has a pretty attractive promotion, though. If you pre-order there, you'll get the usual free Gear Fit2 or microSD card, but also a $150 gift card.

Ah, Black Friday. The biggest (and most malevolent) shopping day of the year. A day of good deals, hateful people, and... other stuff. If you're willing to brave the all that for a new phone, Sam's Club has you covered this year, with the Galaxy S III going for less than a buck with a new two-year agreement. 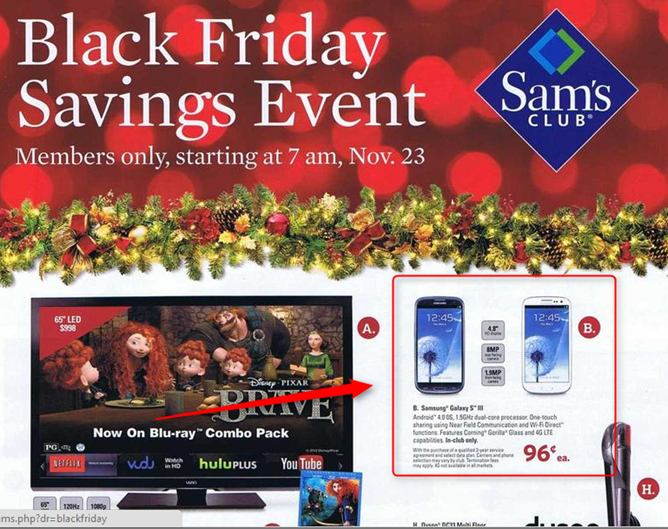 From what we gathered by calling a few different Sam's stores, this is good for all four carriers (so long as your local Sam's has them all). The ad doesn't specify, but it would just be silly to sell them for this cheap on one or two carriers and not the others.

According to a leaked shot from Sam's Club that fell into the hands of Android Central, we should expect Samsung's newest Sprint device, the Conquer, to hit the streets on July 24th. The Conquer is a mid-ranger with modest specs:

Also expected in July is the Motorola Photon 4G - but there is no exact release date as of yet. The Photon packs a much harder punch than the Conquer, coming jam packed with a 4.3 inch display, 1GHz dual-core Tegra 2 processor, 1GB RAM, 8MP rear camera, VGA front cam, 16GB of on-board storage, a kickstand, Webtop, WiMax, all running on Android 2.3.

It seems like only yesterday we were watching Steve Jobs reveal the second iPad and wondering how Android tablet manufacturers would react (actually, it was yesterday). Now we have news that the Wi-Fi-only version of the Motorola XOOM will be priced at $539 at Sam's Club.

Previous rumors suggested the price for the non-carrier version of the tab would be $600, so this is a bit of a surprise. Of course, wholesale warehouses like Sam's and Costco are usually able to sell for much less than other retailers (they rely mostly on memberships for profit), but this is more of a discount than would typically be expected.