The Thunderbolt just can't come soon enough, can it? It seems we've been talking about this beast forever, and Best Buy even officially announced pre-orders, but the uncertainty regarding the actual release date has been killing us. Is it the 14th, the 24th, or something else?

And now it's not the only thing killing us - a tip confirmed by 2 sources points to a whopping $749 full retail price of the Thunderbolt, at least judging by the information currently in Best Buy's systems.

Update 12/29/10: Nope, either the rumor was false or Samsung/Sprint decided to delay the update once again: 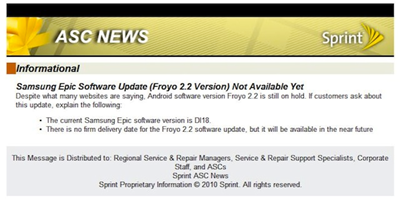 Epic 4G users, remember the Froyo update (DK28) that we thought was final but turned out to be nothing but a leaked test build? Shortly after the leak, Sprint released a statement discouraging the download and reaffirming the official latest supported build was Android 2.1 with Sprint's software version DI18.

The wait resumed, but not for long, as an official-looking photo of what looks like some sort of a memo in Sprint's internal customer support system, showed up over at Phone Arena.

It seems the blogosphere is abuzz with the news that an EU trademark for the name Xperia Play has been awarded to Sony Ericsson, filed the first of the month.

Companies file for trademarks a lot, so we'll see if this name pans out. If it does, it'll quite possibly be the worst marketing decision by Sony Ericsson yet, and may indicate that the Sony mother-ship wants to reserve the Playstation phone name for a later, cooler, probably proprietary-OS device.

Ever since the first time it was mentioned by Androidandme and shortly backed up by RadioAndroid, the whole Androidosphere has been abuzz with the next Google managed device for one simple reason: the Nexus One was and still remains the most open Android device on the market. 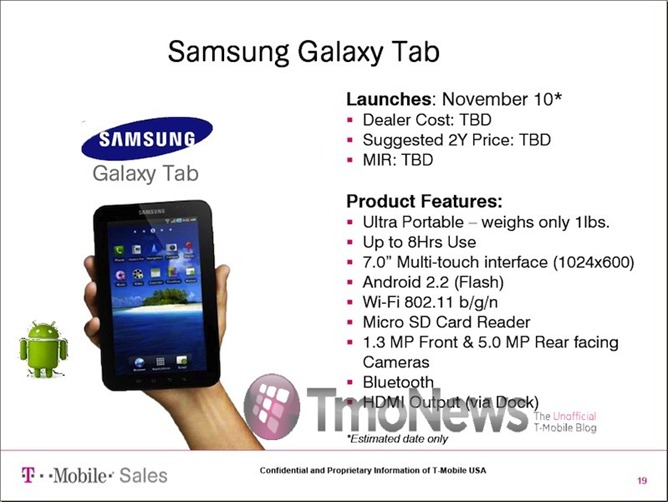 According to TmoNews' latest "dealer ninja" (the one who conjured the screenshot above), the Tab will be launching on November 10th, one day earlier than the date destined for Big Red's version of the tablet. While the screenie offers nothing in the way of price (other than "TBD"), the rumor mill's been there, done that, and pretty much confirmed that T-Mobile's Tab will be costing you $399 on contract and $649.99 off.

Take this with a large grain of salt as it's just a rumor at this point, but one of our sources very close to the Android core who has been testing and working with Gingerbread for quite a while recently shared a little tidbit of info. According to the source, we won't have to wonder what exactly Gingerbread, the next Android OS, is going to bring to the table for too long because the Gingerbread SDK is going to go public next week.