Named WeakSauce 2: The Habanero's Revenge, this tool works just like its predecessor, and it's completely free. Just install the apk from this thread on XDA and run it to attain root. Once it has finished, just install SuperSU from the Play Store and you're ready to go.

The final round of Developer Preview images released on Friday left a number of users without root access on their devices, but a lightning fast quick-fix by Chainfire had them back in business the following day. Yesterday, he took to Google+ with a follow-up of how it works and the issues that are making it more difficult to acquire root on the latest version of Android.

Due to increasingly effective security measures and stricter enforcement of SELinux, it seems that many, or possibly all of the available methods for initializing the SuperSU daemon at startup have been rendered ineffective. As part of Chainfire's updated root, custom kernels were posted for the Nexus 5, Nexus 7, and ADT-1 that switch a few SELinux policies to permissive mode so that SuperSU can be run in the correct context after a device boots up.

You saw Android Wear a couple of months ago when Google unveiled the SDK and both LG and Motorola presented the first promotional pictures. Then you watched the Google I/O keynote that officially launched the LG G Watch and Samsung's surprise addition of the Gear Live.

Disclaimer: Android Police isn't responsible for any harm to your device - proceed at your own risk.
Note: WeakSauce is only for the Verizon variants of the HTC One M8 and M7.
Read More

If you like to mod your Nexus devices but you're also a fan of tight security, you probably already know BootUnlocker. It's a simple app that allows rooted devices to lock and unlock the bootloader without wiping user data. The developer, segv11, is back with v1.5.1 of this handy little utility. The latest update adds support for the WiFi (flo) and LTE (deb) variants of the 2013 Nexus 7 and the ability to set the tamper flag on the Nexus 4 (mako) and Nexus 5 (hammerhead). 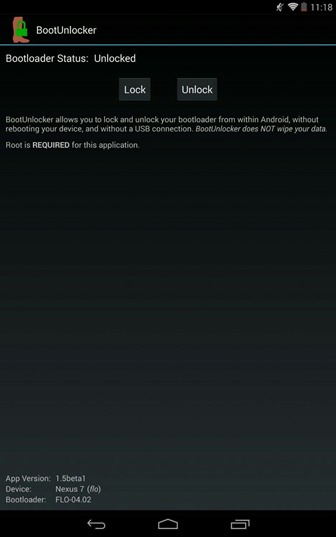 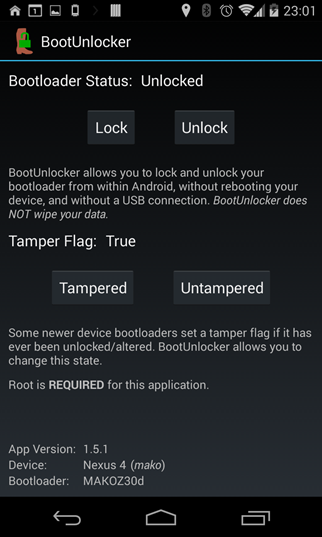 Prior to this update, BootUnlocker supported every Nexus device since the Galaxy Nexus with the notable exception of both generations of the Nexus 7.