Vector Unit has cultivated a reputation as one of the most consistently solid developers on Android, so a new release from them is always a good thing. But when it's a new entry in the Riptide GP series, then it's time to call the boss and tell him you're (cough, cough) "sick." Riptide GP: Renegade is the third installment, and SHIELD Android TV owners can play it right now, only a few days after the PC and console release.

I've never been a huge fan of racing games, but there's always been something about Hydro Thunder that captivated me. As a teen, it was one of my favorite games, and I've kept up with the franchise as much as possible over the last several years. Naturally, this means I've spent a more-than-ample amount of time playing Riptide GP, the mobile-equivalent to Hydro Thunder.

The first Riptide was one of my favorite games to emerge from the Tegra 2 era, and Vector Unit maintained fantastic support over the past two years, even updating it to support enhanced graphics on the Tegra 3 chip.

Vector Unit – the development team behind Riptide GP, Shine Runner, and Beach Buggy Blitz – has long been taking advantage of NVIDIA's Tegra processors. In fact, Riptide was one of the games used to show off the power of the Tegra 2 back in the day, and it was even updated to add enhanced graphics for the Tegra 3, once again highlighting the power of Tegra.

Now, NVIDIA has released a teaser video showing off Riptide GP 2, which will of course be optimized for the Tegra 4 and its 72 GPU cores. The gameplay looks similar to the original Riptide GP, but the waves are larger, curves are tighter, jumps are  bigger, and, of course, the graphics are better.

Show of hands, Verizon users: who's excited to shell out another six bucks a month to Big Red? Verizon and its new partner Extent hope that you are. Today they've introduced the GameTanium Mobile subscription-based service exclusively for Verizon's customers, bringing "more than 100 of the best Android smartphone games and more than 50 tablet games" to subscribers. The fee will show up on customers' phone bill every month, but Verizon has generously offered a three day trial. 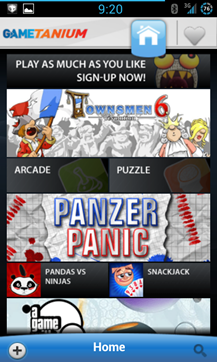 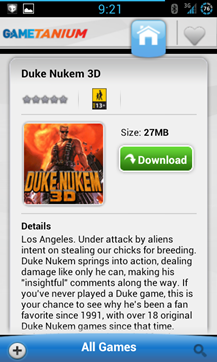 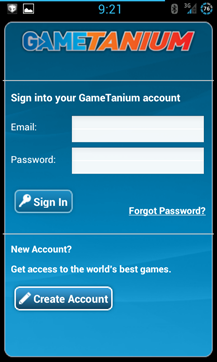 Scoff if you must (and I can hear plenty of our readers winding up already) but on the surface it's a decent deal, assuming that you want to play all of the titles being offered.

Having harbored a lifelong love of both moonshine and wreaking havoc in souped-up airboats, I was naturally excited when we came across Shine Runner. Finally, I can blaze across backcountry bayous, smuggling only the finest hillbilly necessities. This game is the latest from Vector Unit, makers of Riptide GP, and it is sure to bring out the hillbilly in you.

The concept of this game is quite simple - you are an airboat-riding hillbilly out to smuggle several different backcountry essentials around the bayou. Your goal is to make as much money as you can in a 10-day span by buying and selling the goods at different locations.

If you've always dreamed of brewin' and runnin' your own moonshine, but feared the slight legal implications of such a practice, then Vector Unit's new game Shine Runner holds the ticket to make all of your dreams come true.

Vector Unit is the development team behind the amazing jetski racing game Riptide GP, so we already know that they can knock out some fantastic graphics in aquatic environments, and Shine Runner looks no different. It offers amazing boat physics, insane environments with fully-destructible items, killer visuals, and, of course, OpenFeint support so you can put your shine runnin' skills to the test.

Modern smartphones and tablets are, without a doubt, multifunctional devices made to replace those that serve only a single purpose --gaming devices, mp3 players, and, in some cases, even laptops are all covered under the smartphone/tablet umbrella. As such, it's no surprise that I spend almost as much time playing games on my Tab 10.1 as I do other, more productive things.

However, one of my biggest complaints about gaming on a touch-only device is the controls. I hate touch controls. They're awkward, uncomfortable, and all-around difficult in most cases. The fact that I'm heavy handed doesn't help, either -- I'm always afraid of damaging my device during an intense gaming session.